Sonija Kwok Admits Pregnancy: “I Have Been Vomiting Frequently!” 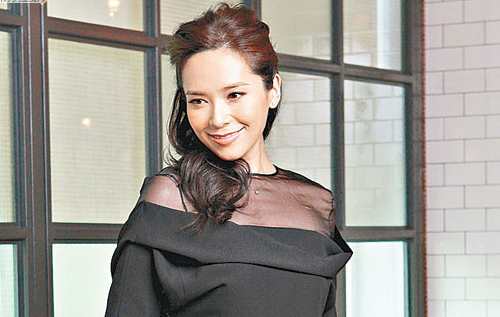 Miss Hong Kong 1999 winner, Sonija Kwok (郭羨妮) recently confirmed that she was more than three months pregnant, adding to the joyous news in the entertainment circle! Sonija admitted that her intention to have a baby only cropped up after getting married in October 2011. It turned out that the baby came quicker than expected. In the next five days, Sonija will speak with the Oriental Daily regarding her feelings before and after joining the entertainment industry, her perspective on love, rumors, her life as an immigrant in Canada, and her work. Sonija’s interview articles are not to not to be missed!

“Things happen in life when you do not think about them. Earlier, I never considered having a child so early and only thought about it after marriage. It was natural to enter this stage [in wanting a child]. My mother frequently urged me, ‘Daughter, you are no longer young. If you do not have a child, it is as if you are missing a wonderful aspect in your life. Next year, you will be 38-years-old; if you want to have a baby, you should hurry up!’ After becoming pregnant and preparing to become a mother, the feeling is quite special.

“I never considered how many children I will have; we will think about it after the baby is born! I do not know what it is like to become a mother yet and do not know whether I will be able to handle it! My husband [Zhu Shaojie 朱少杰] mentioned earlier that he would like to have another child and hopes for a daughter. He said that daughters will cling to their fathers more. I asked him what if the baby turns out to be a boy? He said that he will like it too. I do not have any gender preferences.  If it were a girl, then I can dress her up. If it were a boy, he can protect me in the future.”

“When I knew I was pregnant, my husband was not in Hong Kong. When I called him to tell him I was pregnant, he was extremely happy and insisted that the baby will be a girl! I told him not to think this way, otherwise he will be disappointed if it were a boy. When I first became pregnant, I felt queasy and vomited frequently earlier. I was afraid to go to noisy places as I was very sensitive and would break into a cold sweat! Perhaps due to hormonal changes, I became very impatient. Fortunately, my appetite has been good, preferring sour and salty foods. Although my husband is in mainland China on a long-term basis due to work, my mother takes care of me and prepares soup frequently. I feel very blessed!

“Every pregnant woman looks forward to the ultrasound scan [of the growing baby]. It is wonderful to hear the heartbeat and feel the movement. I will likely cry when the baby is born. I am leaning towards a Caesarean section for the delivery, as I am afraid that I will not have the strength to push, ha ha! In an earlier television program on birth, it was apparent how painful and difficult the childbirth process is. A mother’s love is so great!”

No Desire for a New Stage

“After completing his work, my husband will come back to Hong Kong to spend time with me. We will travel to mainland China together to spend the Lunar New Year holiday. I have already asked him to place his vacation request to take off one month prior to the baby’s arrival. After giving birth, I will continue to work. At this stage, I am not interested in fighting for anything, but hope to have a comfortable job. In the past, I have endured not sleeping for three days and three nights. I have arrived at another stage of life. Due to my pregnancy, I have declined several dramas, losing approximately a 7-figure sum. Despite the loss in income, I felt that it was worth it due to the joyous nature of the news. I feel very blessed!

“Earlier, someone asked me whether living apart from my husband will affect our relationship. I am not afraid! Since the start of our relationship, we have always been separated. When we are together, we will be exceptionally happy.  When I have time, I will go to mainland China to visit him. Returning to Hong Kong, I am used to living by myself. He trusts me very much. It is very important to have trust between two people. There is no need to grow anxious if I can not locate him in one phone call. Similar to flying a kite, it if flies away, you let go of the string. Everyone has their freedom.” Jayne: In this interview, Sonija Kwok sounds like a simple woman. She sounds truly happy with her pregnancy and looking forward to being a mother.

I also sensed that Sonija is someone who doesn’t plan too far ahead and just goes with the flow. She seems to be happy that her husband is somewhat holding the reins. Her comment that if the baby turns out to be boy, her son can protect her in the future is quite telling of her role as more of a follower than a leader.

54 comments to Sonija Kwok Admits Pregnancy: “I Have Been Vomiting Frequently!”