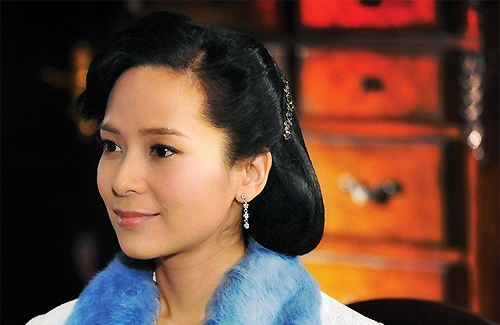 Above: Sonija Kwok currently stars in TVB drama, “The Day of Days”.

After her landslide victory at the 1999 Miss Hong Kong Pageant, and again at the 2000 Miss Chinese International Pageant, TVB quickly recruited Sonija into their acting department. Her first drama was the highly successful and critically acclaimed A Step into the Past <尋秦記>, co-starring Louis Koo (古天樂). In the blink of an eye, Sonija became the next biggest thing in town.

Like many Miss Hong Kong winners before her, many expected 38-year-old Sonija to settle down with a short, bald, but extremely wealthy old man. To everyone’s surprise, Sonija chose to marry the humble and modest action director Zhu Shaojie (朱少杰) in 2011.

“I never thought I would get to give birth. By the time I turned 35, I already gave up on my soul-searching. The normal route in a relationship is to marry and have kids, but it is really hard to do that in this industry. It is very hard to find someone who is compatible, but this all depends on fate! I know many people believed that since I was a Miss Hong Kong, I should find a well-educated, wealthy, and powerful individual to be my husband! There is no need to over-think this! At first, because my husband and I are always separated, I didn’t think [our relationship] would work out. But now I gave birth to his daughter, hahaha! To all the single ladies and men out there – don’t be scared! It is already arranged; it’s just that he or she hasn’t shown up yet!”

Zhu Shaojie, an action director and choreographer, is not famous, and nor is he wealthy. Last year, quite a few rumors were floating around indicating that Sonija had to be the breadwinner of the family. Sonija gave birth to baby daughter, Kylie, on May 22, 2012 and returned to TVB Studios a few months later to film The Day of Days <初五啟市錄>.

Sonija laughed, “People think I would marry a bald, ugly, and rich man, but I know that usually those marriages never end happily. I am not a materialistic person. Having a sense of security is the most important feeling for me. [Shaojie] provides me a normal and simple life. He listens to me and respects me. This is the reality I want.”

So Sonija rather chose a wooden and frank martial artist as a husband over a businessman who can provide her with an endless amount of riches? Sonija laughed out loud, “What’s wrong with that? It’s hilarious! Occasionally I would tell him to show off a few of his moves, and he would actually listen to me and do it! It is so funny!”

Wooden and modest he may be, but to Sonija, Shaojie is a rare gem among the many other men in this world. “Just because he is a martial artist and a fighter, it doesn’t mean he is any more violent! I’ve actually never heard him speak profanity. Not even a single word! He has great self-cultivation. He is very quiet and not very romantic, but no one is perfect. It’s impossible to meet someone who fulfills your entire list of expectations. I know I am not perfect myself, so I cannot require too much from others. Not being romantic is a very minor fault.”

It has been a while since Sonija had been so calm, so relaxed, and so easy-going and fun at an artist interview. In fact, it is not at all wrong to say that Sonija is even more beautiful, more stunning, and more alluring than she ever was.

Sonija thanked motherhood. She gushed that Kylie is her best accomplishment, and that motherhood had positively changed her perspectives on life. “My mentality has changed. When I was younger, I took great important in my performance. I wanted to show everyone my best. I was at war! But now, I would tell everyone to not bother me unless it is something important.

“I’m not as tense as I was before. I am much more relaxed. Things are not as important as they seem. Now everything has become more smooth and coherent for me. In the past, I would concentrate too much on one thing, and if I didn’t get it in the end, I would become very unhappy. But now I’ve gotten more laid-back. All I would think about now is taking care of my daughter, and the grocery shopping I should do once I am off from work!”

Wants Daughter to be a Doctor

When discussing about her daughter’s future, Sonija stressed that she would not let her daughter follow her footsteps into the entertainment circle. “I really don’t want her to join the industry. This road is too difficult to walk on. It would take both luck and skill, and it’s hard to reach a breakthrough. I would rather she live a normal life and do normal things.”

Sonija also reassured that she won’t be a rigid parent. “I want her to be happy. She can learn whatever she wants! I will definitely not be a monster mom.”

But Sonija already has plans for her daughter’s career future. “I honestly really want her to be a doctor. She is very brave, very tomboy-ish, and I will trick her into being a doctor, haha! I will let her play with many medical things, and lead her into liking the profession!” Sonija joked.

54 comments to Sonija Kwok Feels More Beautiful Than Ever