It’s finally happening! The movie sequel for TVB’s A Step into the Past <尋秦記> is ready for production, and the OG members are all coming back.

TVB’s A Step into the Past, aired in 2001, was adapted from the wuxia novel The Chronicles of Finding Qin by Hong Kong author Huang Yi (黃易). It starred Louis Koo (古天樂) as the main protagonist Hong Siu-lung, a 21st century police officer who traveled back 2,000 years with the mission of witnessing the ascension of Qin Shi Huang (Raymond Lam 林峯) as the first emperor of a unified China. However, a software glitch in the time machine took Hong Siu-lung back a few years before the ascension, and he must race through time to return to the future. A Step into the Past paved the careers of Raymond Lam, who was still a rookie actor at the time, and Sonija Kwok (郭羨妮), who had just completed her pageant run. A Step into the Past also gave Louis his first and only TV King win. 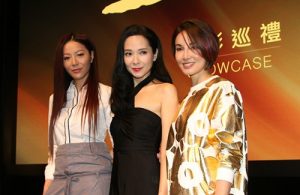 At the Entertainment Expo held today, One Cool Film Production announced that the original cast members of A Step into the Back will return for its film sequel, including Louis Koo, Raymond Lam, Sonija Kwok, Jessica Hsuan (宣萱), Joyce Tang (滕麗名), and Michelle Saram (雪兒), who returned to acting in 2017 after a decade-long retirement.

Temporarily titled Back to the Past, the movie sequel will continue the story of its lead characters 19 years later. “The original story happened in 2000, and now it’s 2019. Technically, it’s 20 years,” said Louis. “I know a lot of people had been waiting for this movie version. I actually wasn’t planning on inviting the original cast, but I do think that it makes for a much better show with everyone returning.”

Jessica, who starred as Wu Ting-fong, said she already couldn’t contain her excitement when she first heard Louis pitch about the project a few years ago. “It’s finally happening,” she said. “I’m beyond excited. It really is like a reunion, especially after seeing Michelle again. Memories of us filming together just keep flashing in my head, how I would take Michelle home every single day because she didn’t live in Hong Kong at the time. I just smile when I see them.”

Louis added, “You would always read in the news about how original cast members from this drama or this variety show would reunite every few years for a reunion dinner, and that’s already exciting enough. But this time, we’re not having dinner, we’re doing an actual movie together again, so it’s definitely even more exciting.”

Sonija, who played Kam Ching, said, “A Step into the Past was my debut  drama, so it holds a really special place in my heart. I was already beyond excited when I heard that this movie would be happening. Thank you, Louis!”

Playing Sin-yau, Joyce said with a laugh, “Louis shocked me by saying that I’d be having a lot of action scenes. I hope he’ll have the money to hire more stunt doubles for me.”