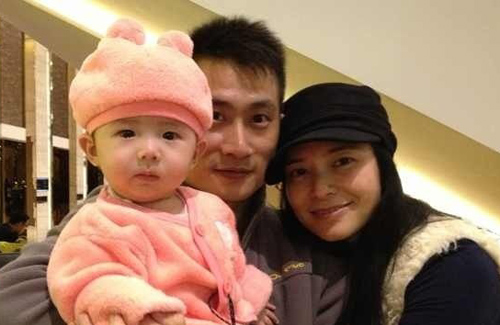 Beauty queen, Sonija Kwok (郭羨妮), once gave praise to the benefits of living a simple life. She commended her action choreographer husband, Zhu Shaojie (朱少杰), for providing her happiness with modesty, and gushed about her one-year-old daughter, Kylie, who has made her feel more beautiful than before. Learning to live a life without worry, Sonija also did not feel any anxiety when her comeback TVB drama, The Day of Days <郭羨妮>, pulled in lackluster ratings earlier this year.

But according to recent claims by the Hong Kong tabloids, Sonija’s romantic life was turning downhill. The former actress was said to be having economic troubles due having an unemployed husband; however, Sonija has since denied these nonsense claims, and clarified through Weibo that she is still as happy as ever.

A Hong Kong tabloid magazine alleged earlier this week that Sonija’s marriage was in danger due to financial difficulties. Sonija is the major breadwinner for her family and has to entirely provide for her husband, daughter, and her own parents. Although Shaojie was promoted to director, he did not receive any other directing jobs after filming Chinese drama, Feng Huo Jia Ren <烽火佳人>, in late 2012.

Sonija had mentioned before that she did not mind being the main provider for her family, but with the pressure of having to pay for all their living expenses, Sonija’s stress was said to be building up day by day. Aside from the burden on handling her family’s daily needs, Sonija was also said to have difficulty in saving money to pay out the mortgage of her $5.6 million HKD home, which reportedly costs at least $37,000 HKD per month.

Sonija also had to fork out her own money to pay for her hospital bills when she gave birth to Kylie in May 2012. The medical bill was said to have exceeded $16,000 HKD.

As Shaojie has to stay stationed in mainland China to receive job offers, it was said that the Hong Kong-based Sonija hardly had the time to visit Shaojie in the mainland. The long-distance relationship also reportedly took a toll on the couple.

Sonija clarified the tabloid’s misconceptions through her Weibo, writing, “Some garbage tabloid is worried about my marriage… they cheated $5 off of everyone! It’s been a while since I’ve last made a statement, because I am now working as a full-time mother… they are raising waves with no wind.”

The 38-year-old actress further wrote, “To all my concerned friends, my family is doing well. [I also want to] thank the magazine’s concerns. I don’t need to show off my love everyday.”