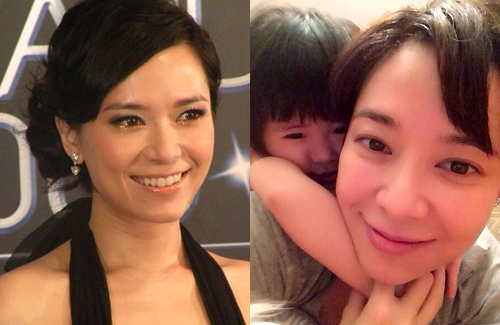 Sonija Kwok (郭羨妮) has been focusing on her family life since marrying Mainland China martial artist Zhu Shaojie (朱少杰) in 2011 and giving birth to their daughter Kylie the following year. Wanting to add a second child to the family, she became pregnant but unfortunately had a miscarriage in April.

Grieving for her loss privately with her husband, Sonija did not share her miscarriage experience publicly until today.  “October 31 has finally passed. It was the due date of our second child, but the baby wasn’t born. He or she decided to become heaven’s little angel and left before dad and mom could tell everyone the good news. You left quietly…even though it’s been a while, mommy will never forget you in this lifetime.”

In February, Sonija had a positive pregnancy test and heard the fetus’ heartbeat in the initial ultrasound. “But I felt odd, as I didn’t feel pregnant. I didn’t have any vomiting or other symptoms. Since the first trimester was not over yet, I didn’t announce [my pregnancy] publicly. In a followup exam, we discovered there was no fetal heartbeat. The doctor doesn’t know what happened. At that moment, I felt heartbroken.”

With her grief now behind her, Sonija finally felt comfortable in discussing the incident. She is not discouraged by the miscarriage; both she and her husband still want to have another baby.

Colleages Were Unaware of Sonija’s Miscarriage

April was coincidentally the time when Sonija concluded filming TVB’s new series Under The Veil <無雙譜> with Wayne Lai (黎耀祥). Sonija stated that the entire cast and crew took great care of her during this time although they were unaware of her miscarriage. After filming wrapped up, Sonija rested at home for several months and made occasional promotional appearances.

Fellow Under the Veil co-star, Wayne Lai, did not recall any abnormalities with Sonija’s health when they were filming. Trying to cheer Sonija up, Wayne said, “If she wants to have children later, she can work hard and have as many as she wants – don’t worry. I’ll ask how she is when I bump into her.”