Stephen Chan Beats All Odds and Returns to TVB! 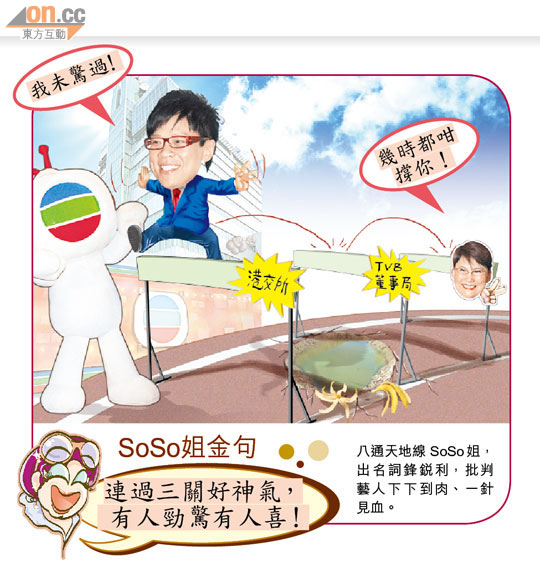 Stephen Chan Chi Wan has returned to TVB! Plagued by a corruption scandal since March, Mr. Chan was formally charged by the ICAC and was on administrative leave from TVB. Although the court proceedings have not ended, TVB Deputy Chairman, Mona Fong, reinstated Mr. Chan’s former General Manager title.  Allegedly, Ms. Fong persuaded the TVB Board of Directors to allow Mr. Chan to resume his position.  Mr. Chan appeared at a secret meeting to meet with board members yesterday.

On September 16th, there were rumors that Mr. Chan would return to TVB. However, the ICAC pressed formal charges against Mr. Chan and the reinstatement was immediately stopped. Things took a dramatic turn when TVB issued a press release to all major Hong Kong media announcing Mr. Chan’s immediate reinstatement yesterday.

In TVB’s press release, the Board of Directors stated that the nature and substance of the ICAC allegations against Mr. Chan revolve around artist management only. Mr. Chan had other responsibilities as General Manager which were unrelated to the ICAC charges. The Board decided to resume Mr. Chan’s previous responsibilities except those involving talent management and casting arrangements.

Mr. Chan was able to resume his position at TVB due to the strong support of Ms. Fong. During Mr. Chan’s administrative leave, Ms. Fong kept in close contact and consulted with him on TVB work matters. Ms. Fong still held Mr. Chan in high esteem. Although Mr. Chan hoped to resume all of his previous responsibilities, Ms. Fong faced opposition from the TVB Board of Directors, which consisted of Mark Lee Bo On, Mrs. Christina Lee, and Norman Leung Nai Pang, etc.   Despite initial opposition, Ms. Fong did not give up and continued to lobby for Mr. Chan’s return.

To avoid complications, TVB kept Mr. Chan’s reinstatement arrangements highly secretive. Only a handful of senior management were informed. After the Board of Directors approved Mr. Chan’s return the day before, TVB issued a press release yesterday announcing his reinstatement. In lieu of the secretive Board meeting, many people initially thought that Vice Chairman, Norman Leung, would retire.

Scheduled to resume work at 10 AM yesterday, Mr. Chan arrived at work early at 8:45 AM. Accompanied  by Norman Leung, Mr. Chan entered the conference room and said to his colleagues, “I am so sorry, everyone! Over the past few months, I brought about so much trouble!” Realizing that Mr. Chan was making a comeback with strong backing, everyone burst into applause. Mr. Leung asked all senior managers to fully support Mr. Chan.

During Mr. Chan’s administrative leave, his responsibilities were issued to Mark Lee Bo On. Mr. Chan resumed his previous responsibilities with the exception of artist management. As a result, Virginia Lok Yi Ling will temporarily report directly to Mona Fong in this respect.

At 4 PM yesterday, Mr. Chan met with the press while accompanied by Deputy Director of External Affairs, Tsang Sing Ming. Mr. Chan did not panic amidst the chaos and appeared smiling widely. He greeted the press, “Sorry to have everyone wait so long! I am extremely grateful to God and TVB for reinstating my position! I had a lot of meeting to attend today. I am very happy to resume my job. I am most concerned about how to work better with my colleagues and produce better programs. Since I have to attend a meeting now, I will talk more with everyone later.” Mr. Chan traveled to an off-site meeting at the Hong Kong Tourism Board. Returning back to TVB City, Mr. Chan worked until 8:30 PM that night before leaving for home.

The ICAC was shocked by Mr. Chan’s reinstatement at TVB. Generally, employees involved in ICAC investigations do not resume their jobs prior to the court ruling. Since TVB was a limited company and in the private sector, the ICAC could not influence this arrangement. Hong Kong stocks fell 334 points yesterday and TVB’s stock shares fell ten cents to $39.25 (HKD).  The Securities and Futures Commission and the Hong Kong Securities and Clearing Ltd. declined to comment on Mr. Chan’s reinstatement. Jayne: I am glad to hear Stephen Chan got his job back at TVB! Mr. Chan is very talented and intelligent; TVB would likely benefit from his return. As you can see, his comeback has been sensationalized in the Hong Kong media.

Through this incident, Mr. Chan learned who his true supporters were. The Sun also ran a splashy expose on the artists who distanced themselves from Mr. Chan due to the corruption scandal: Bernice Liu, Patrick Tang, Amigo Chiu, and even Steven Ma. The Sun highlighted Bernice Liu and said that she drew very clear lines between herself and Mr. Chan. Allegedly, when Mr. Chan’s reinstatement was brought up, she did not want to discuss it further and diverted the topic instead.

As a good leader, I hope Mr. Chan does not carry any grudges after resuming his power. The press may or may not be true in the accuracy of which artists distanced themselves, but it is likely true that many did in fact do so.

30 comments to Stephen Chan Beats All Odds and Returns to TVB!