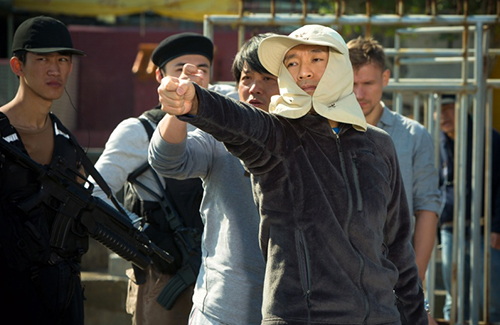 Stephen Chow’s (周星馳) mysterious new comedy The Mermaid <美人魚> is king of the 2016 Chinese New Year box office. The Mermaid, which was released on February 8, Lunar New Year, grossed $668,176 HKD in midnight views and $4,941,139 HKD on the first complete day, marking the biggest opening day record for a Chinese-language film in Hong Kong. It has grossed $5,609,325 HKD thus far, successfully putting The Mermaid as the top-grossing Hong Kong film in the first two days of the holiday week.

In Mainland China, the film achieved a record-setting 276 million RMB debut, setting a new single-day record for local films. The Mermaid is only beaten by Hollywood’s Furious 7, which scored a 401 million RMB opening when it was released in China last April. The Mermaid is well on its way to break Stephen’s own box office record with Journey to the West: Conquering the Demons <西遊·降魔篇>, which is the highest-grossing Chinese-language film in the world.

Produced, written, and directed by Stephen Chow, The Mermaid stars Deng Chao (鄧超) as a playboy billionaire who wants to build a marine park over an ocean gulf. His plan is hindered by a mermaid, portrayed by newcomer Jelly Lin (林允), who attempts to assassinate him.

Like most of Stephen’s past films, the plot of The Mermaid was kept under wraps until its release. There was no advanced screening or red carpet premiere to market the film. Reviews that came in after the midnight showing were positive.

The box office from the three CNY films secured 94.5 percent of the Mainland market, with The Mermaid taking 41.8 percent.

Unlike The Mermaid, both From Vegas to Macau III and The Monkey King 2 opened in Hong Kong two days before the Chinese New Year, on February 6.

TAGS: From Vegas to Macau 3, Stephen Chow, The Mermaid, The Monkey King 2