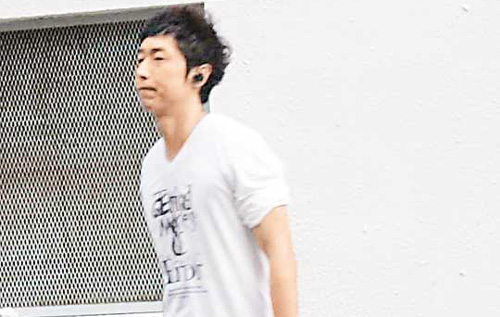 Yesterday, Steven Ma (馬浚偉) and Linda Chung (鍾嘉欣) were at Shek Kip Mei Street to film a vehicle collision scene for their new series. Since the scene was perceived to be too realistic, it frightened an old lady present who mistakenly thought that a traffic accident had actually  occurred. She immediately called the police, stating that a motorcycle had mounted on the pavement and swept away some people. This caused the police and the firefighters to assume that a disastrous traffic accident had occurred upon receiving the telephone report and immediately dispatched some men to rush to the scene, only to discover that it was just a misunderstanding and false alarm.

Unexpectedly, after that disturbance, another female passer-by stood beside the motorbike which had to be used for filming and thus caused interference. Despite persuasion, she refused to leave.  Thus, the drama team had no choice but to halt filming.

After which, the reporters understood from Steven that at that point in time, he was filming a vehicle collision scene with Linda for TVB’s new drama, Lucky Father <當旺爸爸>. The scene required  many temporary actors to act as students who have been hit (by the oncoming vehicle). At that time, an old lady passed by and grew very nervous, mistakenly thinking that an actual traffic accident had occurred and hence called the police. After realizing that the accident was only a scene in a TVB series, she didn’t bother them again.

Accused of Polluting the Environment

However, Steven revealed that another woman had displayed agitation at the filming set. That woman was upset over the pollution of the environment as the cast and crew did not turn off the air-conditioning and engine of their outdoor filming van (which was parked along the road). Hence, the woman tried to be difficult by refusing to leave.

Steven thus said, “We usually change filming outfits in the van. There’s a time limit and after that, we will always switch off the engine of the idle vehicle. However, as she was saying, she suddenly went very near to us. I grabbed Linda and returned into the van and didn’t have any confrontation with her to avoid further aggravation. After waiting for that woman to leave, we resumed our positions and finished shooting the remaining scene. Finally, we managed to complete it.”

Steven continued, “However, I must also praise the police for their quick reflexes and efficiency regarding this matter. I didn’t expect that their police car would arrive at the scene so quickly.” Steven also pointed out that when shooting an outdoor scene, TVB had always followed the procedure and applied for a filming permit. This time was no exception either. Yesterday when filming the vehicle collision scene, although it was mistaken to be real, the police didn’t interfere with their filming upon reaching the scene. However, someone else was too agitated but fortunately, controlled herself and left. Steven also said, “That lady probably had a emotional problem. She kept hurling insults at us and made a  ruckus until it was so awful hearing it and scolded us for being selfish, unscrupulous and even warned us to be careful of breaking our ankles!” Ah K: Wow, Steven Ma does seem quite “man” for protecting Linda by grabbing her along with him back into the van! ^_^