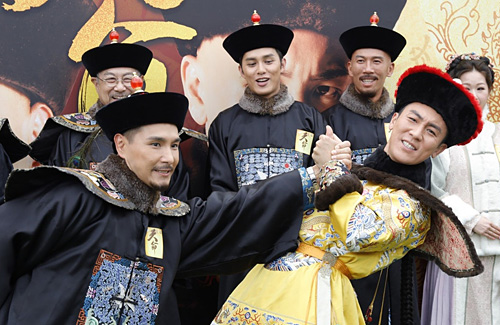 Ruco recently attended a promotional event for the series. To prepare for his role and familiarize himself with the historical figure of Heshen, Ruco spent a lot of time reading historical books. He expressed, “The producer actually gave me a lot of books to read. There is also a lot of information on the Internet. There are both official and unofficial historical readings. When we started filming, we already read a lot about it.”

Heshen has remained a central character in popular culture and is often depicted as a villain in various productions. Mainland Chinese actor, Wang Gang (王剛), has portrayed Heshen numerous times and imparts a comical air to the character. When asked whether Ruco was afraid of being compared, he responded, “A lot of people associate Heshen with comedy, where the character would twist and justify unreasonable things into logic. Actually, within the palace, Heshen is a powerful figure who is under one person, but above millions of others. How much pressure do you think he feels? How did the other officials treat him? This drama is not a comedy, so I think it will show the audience another side of Heshen.”

Ruco also pointed out that Heshen in the drama is more closely aligned with historical facts. “In addition to fighting with words, Heshen actually does know martial arts. I don’t think many people know that Heshen is a skilled martial artist, so I hope the drama will pass along these facts. Not only is he skilled in literary composition and wushu, he is also fluent in several languages. A lot of people don’t realize why the real Heshen is such an intriguing character. I hope to be able to bring out these characteristics.”