New ViuTV drama Till Death Do Us Part <婚內情> held its blessing ceremony on Thursday, November 1st. The modern drama about the complications of marriage stars Sunny Chan (陳錦鴻) and Sheren Tang (鄧萃雯) as an old married couple experiencing a breakdown of trust in their relationship. Although both are TVB drama veterans, Till Death Do Us Part is Sunny and Sheren’s first drama collaboration.

“As a wife, I thought I’d be doing a lot of domestic fluff, but he has too many girls around him,” complained Sheren with a laugh. Sunny immediately retorted, “We play an old married couple, unlike her, who gets to sleep with Alex Lam (林德信) on my bed!”

33-year-old Alex Lam, son of Cantopop legend George Lam (林子祥), plays Sheren’s lover on the show. Sunny dragged Alex into their interview and joked, “Are you guys really sleeping together on the same bed? Any touching of body parts?”

Asking Alex if he would be having any intimate scenes with Sheren, he awkwardly said, “I play her doctor on the show, and I really like her. According to what I know, there will be bed scenes, but we haven’t filmed them yet.”

The breakdown of trust and extramarital affairs will happen to both husband and wife. While Sheren develops a relationship with Alex, Sunny will have an affair with Bernice Liu (廖碧兒), who plays Sheren’s younger sister. 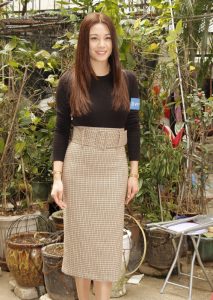 Bernice and Sunny have starred in several TVB television dramas together before, having played a couple in The Slicing of the Demon <凶城計中計> and The Greatness of a Hero <盛世仁傑>. After sharing that she had just finished an intimate scene with Sunny that took three days to film, Bernice was asked if there was any awkwardness with the veteran actor. She happily said, “Not at all. We rehearsed before, and I’ve known him for many years. I remember I shot my very first dramatic scene for Healing Hands III <妙手仁心III>, and it was Sunny, who was filming another drama in the next studio, came to help me do the scene. He’s always treated me as his younger sister.”

As the show has a rather sensitive theme, is it giving Bernice a fear of marriage? She said, “No. After filming this show, I’ve realized how important it is to make sure to not give anyone the wrong signals. Don’t want any misunderstandings!”

Sunny and Sheren get along on and off camera, and while Sheren is not married herself, she would consistently consult Sunny about how married life is lie. Sunny said, “She would ask me things like, how are we usually before we go to sleep? Would we talk, hug, or kiss? I told her that we’ve been married for nearly twenty years. We don’t need to do any of that. Usually it’s the man who does something wrong, so he would ask his wife, ‘Are you tired? Want a massage?’ I got that advice from my uncle!”

Asking Sheren if the show is making her lose trust in marriage, she said, “Not at all. I’ll still consider marriage if I meet the right person.”