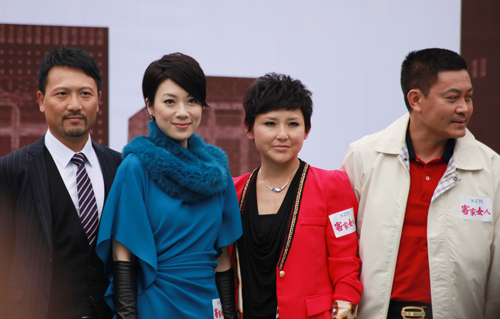 A blessing ceremony for CTI’s eighth drama, The Hakka Women <客家女人>, was held on October 18. The family drama stars Maggie Cheung (張可頤) and Prudence Liew (劉美君) as twin sisters of Hakka heritage who were separated at a young age. Although both sisters are leading successful lives to their own right, they have accumulated behind longstanding grudges and bitterness towards each other and their family.

The Hakka Women also stars Poon Chan Leung (潘燦良), Zac Kao (高皓正), Lam Lei (林利), Savio Tsang (曾偉權), and May Tse (謝月美) as the sisters’ acquaintances. The drama will be produced by former TVB scriptwriter Choi Suk Yin (蔡淑賢), and directed by former TVB director Luk Tin Wah (陸天華). The script will be helmed by Alex Pao (鮑偉聰), who is best known for writing the scripts of Secret of the Heart <天地豪情> and comedy, War of the Genders <男親女愛>.

Below is the translated synopsis of The Hakka Women:

Leung Mei Hang (Maggie Cheung) is part of the executive committee at an influential PR consultant firm. She currently lives in Residence Bel-Air, one of the most prestigious residential areas in Hong Kong. Proud, arrogant, and fussy, Hang is the epitome of a “Kong Girl” – but Hang was actually from a humble Hakka village in mainland China. She arrived to Hong Kong thirty years ago bare-handed and unarmed, and it took every bit of perseverance and determination to bring nothing into everything.

Leung Mei Tin (Prudence Liew) is Hang’s older twin sister who is still living in mainland China. Although not as educated as her sister, she is talented, intelligent, and has a knack for business. She is currently the owner of a small Hakka restaurant, the manager of a large countryside factory, and a representative of her village. There is no one in her town who hasn’t heard of her. She has truly become the “Light of Hakka.”

But the two sisters rarely contacted each other. When they reunite, past grudges and resentments are manifested. The once-close sisters are never the same again.