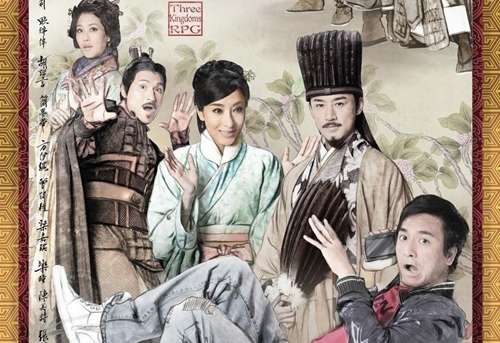 Vincent Sima (Kenneth Ma) is a lazy slacker who works as a temporary actor. Addicted to video games, Vincent is passionate in playing the Three Kingdoms video game and becomes a master in game strategy.

Falling in love with Liu Bei’s maid, Song Yau (Tavia Yeung), Vincent’s life becomes more absorbed in a world he does not truly belong to. Vincent shares one night of intimacy with Song Yau.

Three Kingdoms RPG retells the well known story of the historical period, in which three rival states, Wei, Shu, and Wu engaged in fierce battles. Will Vincent’s modern wit allow him to outwit the most brilliant military strategists of the time? Will Vincent adopt the Three Kingdoms era as his new home? Or is he destined to return to modern Hong Kong and leave behind his true love?

The 25-episode Three Kingdoms RPG is produced by Lau Ka Ho (劉家豪), who resigned from TVB earlier this year to work for another local television station, Now TV. Featuring a troupe of TVB’s most popular actors, Three Kingdoms RPG will likely be a crowd pleaser.

Jayne: The trailer was funny! We get to see the silly side of Kenneth Ma. And the beautiful voice of Raymond Lam spouting poetry.

Raymond is quite convincing in these type of scholarly roles, although the facial hair unnecessarily aged his looks. Raymond filmed “Three Kingdoms RPG” in March 2011 during the height of the Mavis Pan bed photo scandal, so let’s see whether this affected his emotional performance in the series.

The concept of “Three Kingdoms RPG” reminds me of Louis Koo’s “A Step Into the Past.” There will be plenty of anachronistic jokes, even pop musical tunes!