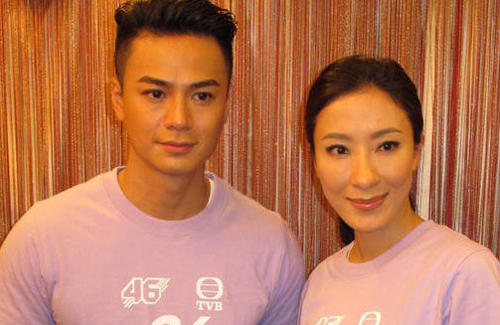 Tavia Yeung (楊怡) appears smitten with Him Law (羅仲謙) and believes he has a chance to shine at this year’s TVB Anniversary Awards.

There is no denying that Tavia and Him share a very close bond even though they have never officially clarified the status of their rumored romance. The two have publicly supported each other through thick and thin, and their relationship generated enough interest to propel both of their careers into new heights.

Currently promoting their latest drama, The Hippocratic Crush 2 <On Call 36小時II>, Tavia and Him are once again the media’s focus and have fielded many questions regarding each other’s career progress. Even though Him is still a distance away from the top honors, Tavia thinks that his latest performance will give him a fighting chance in the upcoming Anniversary Awards. On a radio interview on November 25, Tavia commented, “I don’t know which award he will be nominated for… but I hope that he will have a chance to compete. I will definitely support him.”

While she is not ready to discuss marriage, Tavia is comfortable enough with Him to consider a long-term commitment. Regardless of his alleged abusive acts in the past, Tavia finds Him a gentleman. “To me, he is a man who really knows how to take care of people, and is also very responsible….”

Already a TV Queen, Tavia confessed that she feels less anxious about winning this time around, and will face the Awards with a calmer mindset. More importantly, though, she hopes that her The Hippocratic Crush 2 co-star Kenneth Ma (馬國明) will take home the TV King title, and vowed to do whatever she can to help him achieve this goal.

34 comments to Tavia Yeung Believes in Him Law’s Talent