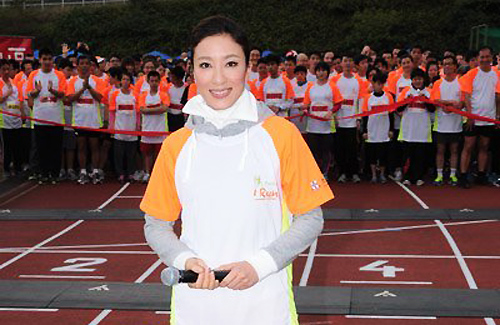 Tavia Yeung (楊怡) had a car accident in mainland China on January 19, while en route to a promotional appearance. “The front of the car is crushed. For one moment, I was very scared. Fortunately there were no injuries, but I was most afraid of being late.”

Since both Tavia and Michael Tse (謝天華) were busy working on Saturday night, they missed the cast and crew dinner gathering to watch the 2-hour finale of Friendly Fire <法網狙擊>. Although she was unable to attend, Tavia will chip in on the dinner cost, since she is the leading lady in the drama.

On Sunday morning, the hard-working 33-year-old TVB actress returned to Hong Kong to participate in a marathon sponsored by the Chinese University of Hong Kong (CUNY). Tavia was a special awards presenter at the event. The press teased the self-professed non-athletic Tavia that she has her own personal fitness trainer in the very fit Him Law (羅仲謙). “I don’t have a personal fitness room. I injured my back earlier, and many colleagues offered exercising tips to heal my back.”

Tavia’s character in Friendly Fire, Chris Fong, had worried about developing breast cancer due to her family history. After Chris’ fears were placated by JJ Kam (Michael Tse), they had a baby together. In the finale, Chris was milk-feeding the baby in the rest area adjacent to the court. “This scene is to showcase the warmth of a family. At such a critical time, Chris can become a regular woman. It is meant to surprise the audience,” Tavia said.

Another illogicity pointed out was the rapid rate in which Sammy Leung’s (森美) character was able to board a flight en route to the United States in order to pursue Sharon Chan (陳敏之).  Netizens laughingly wondered if Sammy’s character already has an American visa. The flight that Sammy took was aboard Solar Airlines, the name of the fictional airline company featured in Triumph in the Skies <衝上雲霄>.

After the death of Benz Hui’s (許紹雄) character, Tavia Yeung’s father, portrayed by Yu Chi Ming (余子明) decided to go on a cycling tour in Taiwan to see sunrise, fulfilling his deceased wife’s wishes. Netizens found that the plot bore resemblance to a bank commercial which was based on real-life events of seniors who rode motorcycles on a 13-day tour in Taiwan, while bringing photos of their deceased spouses and friends. The only thing that TVB scriptwriters changed was changing the vehicle from a motorcycle to a bicycle.

46 comments to Tavia Yeung Had Car Accident in China