The 12 Finalists for Miss Hong Kong 2015 Meet the Press 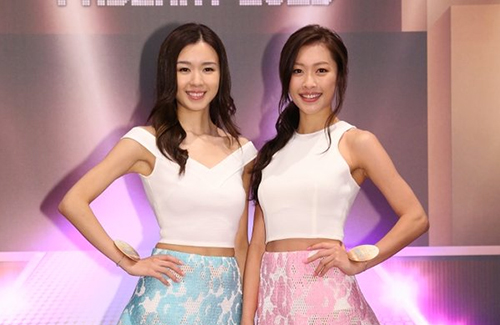 Contestants for the Miss Hong Kong Pageant 2015 is ready to greet Hong Kong. After a strict primary election and secondary election, the upcoming pageant has narrowed down the competition from 16 contestants to 12.

Wearing form-fitting white tops and expanded lace skirts, the 12 official contestants for Miss Hong Kong 2015 greeted the press in a conference held on July 2. Louis Cheung (張繼聰), who will be hosting the finals next month, was also present at the press conference.

Contestants #1 Louisa Mak (麥明詩) and #4 Ada Pong (龐卓欣) made numerous headlines after their excellent academic backgrounds were revealed to the public. Not only are they hot favorites to win the crown, the girls are also old classmates, as both have studied at Diocesan Girls’ School. Louisa revealed that Ada left the school to study overseas in her 10th year.

Louisa is law student from the University of Cambridge, and was known for scoring a rare 10A in the HKCEE back in 2009. She received media coverage for her academic success and was interviewed several times. In one of her old interviews, Louisa expressed that her goal was to become Hong Kong’s Chief Executive in the future. Asking her if she still held onto that dream, Louisa said, “I care about our society, and getting into politics is a way to reach that. But I was very young at the time and also naive.” Louisa added that while she never thought about giving up that dream, she would not purposely chase after it. “I have to take care of myself now first!”

Ada said she is happy to be competing with Louisa in the pageant. She said, “We are old classmates, so we were both very shocked when we saw each other! We do contact each other privately.” When speaking about her father, who is an influential figure in the financial industry, Ada said he is her biggest supporter. “I left my job in order to compete in the pageant. My father is supporting me financially.”

#7 Sylvia Ng (吳佩欣) just graduated with a degree in biology. On why she decided to compete for Miss Hong Kong, she said she has many interests and is still searching for her passion. “I want to broaden my horizons, train myself, and learn how to stay firm in the face of pressure.”

Earlier, #10 Kristi Chan (陳靜儀) was accused of being featured in a lewd video that leaked online, but it was quickly proven to be a mistake. Kristi was upset with the reports. “I was shocked. That girl couldn’t be me. Thank goodness the news reports later clarified for me.”

The 12 contestants will be traveling to Tokyo, Japan next Tuesday to receive additional training. The entire training segment will be shown in two episodes, slated to be released on the evening of August 22 and 23. Finals will be held on August 30.