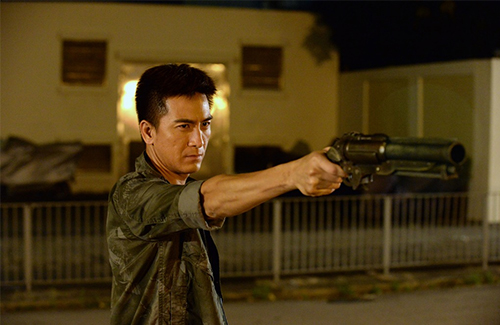 After enduring a nearly two-year hiatus, co-creators Dave Fong (方駿釗) and Ruby Law (羅佩清) are finally ready to present the sequel, which will answer questions that lingered in the finale. Set directly after the 2017 original series, The Exorcist’s 2nd Meter continues the journey of Siu Ma and Shek Kam-dong as they battle demons who want to control the world.

Question 1: What Will Happen to Ling’s Baby?

The Exorcists’ Meter ended with the death of the sage demon Salvia (Mandy Wong 黃智雯) and the evil cop Kwok Chin-ming (Hugo Wong 黃子恆), both under the hands of Siu Ma (Kenneth Ma). However, the demons were not totally vanquished, as Ling (Iris Lam 林凱恩) was carrying the child of Chin-ming. In the ending, Ling’s eyes turned red, hinting that Ling’s child could be a demon baby.

In regard to this, Producer Dave Fong said, “The demon baby will be born, and his story will drive the rest of the series.”

Head writer Ruby Law said, “Technically Ling will also become a demon, because she eventually realizes that Chin-ming’s death had something to do with Siu Ma. Her obsession with finding answers will attract demon spirits. In the sequel, she is an important villain.”

Question 2: Did Siu Ma Return to the Real World?

The previous series ended with Siu Ma vanquishing the demons, and in his hands appeared another exorcising pistol. Viewers at the time theorized that Siu Ma was still in the meta-reality created by the demons, that everything was fake and Siu Ma was still unknowingly trapped.

Ruby Law said, “I think viewers are thinking too much into it. Siu Ma has already returned to the real world.”

In the finale, Siu Ma called out thousand year old rock spirit Shek Kam-dong (Hubert Wu 胡鴻鈞) three times in hopes to get him to make an appearance, but to no avail. Siu Ma returned to his car feeling defeated, only to see Shek Gam-dong appearing in his backseat. However, Shek Kam-dong didn’t appear to be Shek Gam-dong, as he had asked Siu Ma: “You forgot about me?” Siu Ma hesitantly asked, “Ho Jai?”

Netizens had suggested that this Shek Kam-dong was actually a demon who could transform into the person that Siu Ma wanted to see the most. They theorized that the Shek Kam-dong in the car was either a demon, or the real Ho Jai.

Ruby Law said, “Shek Kam-dong will definitely appear in the sequel, but he will be appearing in many different forms, and will appear in a different reality. Shek Kam-dong was written to be a character that can transform into anything.”