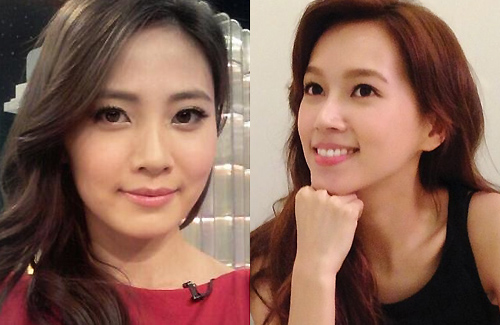 With the exodus of popular leading TVB artists, a new generation of TVB fadans also arrives. Which TVB actresses will lead the next generation of Hong Kong dramas? The media makes their choice picks!

Rebecca Zhu is Learning On the Way

A Suzhou native born in 1987, Rebecca Zhu (朱晨麗) joined TVB after she was crowned as 2011’s Miss Hong Kong. At the time, the media referred to her as “pirated Fala Chen (陳法拉)” due to their similar physical appearances. Rebecca became associated with Fala again when she replaced Fala in the 2012 anniversary drama Silver Spoon, Sterling Shackles <名媛望族>.

Although Rebecca had to audition for Silver Spoon, Sterling Shackles – her debut drama – she was not sure if she was up for the job when she got the casting notice. “I went through this period of struggle. When you’re acting, you have to let go of your Miss Hong Kong baggage. At the time, I wasn’t sure if I should maintain my sophisticated image or just risk it all. For example, a Miss Hong Kong would never portray a clown!”

Rebecca’s fame went up another notch after starring in Silver Spoon, Sterling Shackles, and her rumors with TVB’s number-one bachelor, Kenneth Ma (馬國明) also contributed to her rising popularity. “I’m just an ordinary person. I admit I wasn’t very happy with these reports at first. We are artists, but we are also human. We too want to have our own families in the future.  When it comes to relationships, that boils down to fate. I am very happy right now. I will not be bothered by these false reports.”

Also involved in grand productions Triumph in the Skies 2 <衝上雲霄II> and Always and Ever <情逆三世緣>, Rebecca is being heavily promoted by TVB. She said, “When I was filming Triumph in the Skies 2, I received advice from a senior, who told me to relax my acting. When you are acting, you are performing as someone else, so you must learn to let go of yourself in order to fully immerse in your role. As for Always and Ever, Bobby Au Yeung (歐陽震華) is a very funny senior! Before I met him, I was worried that he would be very strict and yell at us, but he’s not. He loves to joke around and he makes everyone laugh.”

Rebecca looks up to seniors Carina Lau (劉嘉玲) and Monica Chan (陳法蓉), both whom share the same Suzhou roots as Rebecca. As for her chances of rising to leading fadan status, she said, “Some say it depends on faith and some say it depends on luck, but I say the most important thing to do is to set up a good foundation. Do your best.”

Who is Kelly Fu (傅嘉莉)? Months ago she was not widely known, but now, we can all recognize her as Ron Ng’s (吳卓羲) rumored girlfriend.

The 28-year-old really minded the fact that she had to rely on Ron’s name to be famous, but after much thought, she came to embrace it. “No one really knew who I was when I was still a model. There wasn’t really a way to tell everyone who I am, but now, after [the rumors], people can at least recognize me!”

The Ron and Kelly dating rumors, however, angered Ron, who exclaimed in an earlier interview, “Whether it was in the past, now, or in the future, dating will never happen between Kelly and I!”

Was Kelly unhappy with Ron’s statement? “Not unhappy, but I am curious to why he’s so angry! Haha! Maybe the misunderstanding really affected him. There’s pressure on him when he films dramas, and also pressure when the drama is airing. He doesn’t want anything else. I have no regrets, because I never told the media I was [dating] him.”

Kelly debuted ten years ago as a commercial model, and has appeared in films such as Infernal Affairs 2 <無間道2> and Fairy Tale Killer <追凶>. Despite her attempts to make a name in film, it was the TV drama Triumph in the Skies 2 that brought her fame.

Currently shooting TVB romantic drama Love Me, Please Leave a Message <愛我請留言>, Kelly expressed that she has just been through a breakthrough in her career. “At this moment, my career comes first. I don’t want others to believe that I only care about dating or having fun. I want to have my own representative work.

Christine Kuo (苟芸慧) – 30 years old. Crowned the 2009 Miss Chinese International, Christine earned the name “pirated Kelly Lin (林熙蕾)” when she first debuted. As of August 2013, Christine has filmed 13 dramas for TVB, most recently Beauty at War <金枝慾孽貳>. She is also best known for her rumors with Aaron Kwok (郭富城).

Priscilla Wong (黃翠如) – 31 years old. Priscilla debuted in 2003 as a news anchor for Cable TV, but signed with TVB after her contract with Cable TV ended in early 2012. Rumored to be TVB executive Sandy Yu’s (余詠珊) favorite, Priscilla has filmed four TVB dramas in under two years. She is currently shooting Love Me, Please Leave a Message, starring opposite Raymond Wong (黃浩然).

Lin Xiawei (林夏薇) – 26 years old. Best known as Raymond Lam’s (林峯) cousin, Xiawei came from a professional acting background. She was in the 2009 graduating class of Beijing’s Central Academy of Drama and joined TVB in 2011, debuting in the sitcom, Til Love Do Us Lie <結·分@謊情式>. She replaced Aimee Chan(陳茵媺) as the female lead in the upcoming TVB wuxia drama, Cold Mountain, Hidden Dragon <寒山潛龍>.

Sire Ma (馬賽) – 26 years old. Though she was the second runner-up at the 2008 Miss Hong Kong pageant, Sire received generous promotional opportunities from TVB. She was awarded the Most Improved Actress at the 2011 TVB Anniversary Awards, and starred in Lee Tim Sing’s (李添勝) Bullet Brain <神探高倫布>, starring opposite Wayne Lai (黎耀祥).

Angel Chiang (蔣家旻) – 23 years old. Angel joined TVB after auditioning for 2007’s talent scout TVbeople. Though Angel spent a few years portraying minor characters in TVB dramas, she shot to fame after portraying the teenage version of Hazel in the 2012 drama When Heaven Burns <天與地>. She is currently part of the main cast in the highly popular sitcom, Come Home Love <愛·回家>, and is the female lead in Patrick Kong’s (葉念琛) new film, A Secret Between Us <第一次不是你>.

Natalie Tong (唐詩詠) – 32 years old. Natalie joined TVB in 2003, but she had already made a name for herself through 2000’s RTHK idol drama Y2K <青春@Y2K>. Her breakthrough performance in 2010’s A Fistful of Stances <鐵馬尋橋> earned her a Most Improved Actress win and a Best Supporting Actress nomination at the TVB Anniversary Awards.