The Rebirth of Stephen Chan and Reversal of Fate for His Supporters? 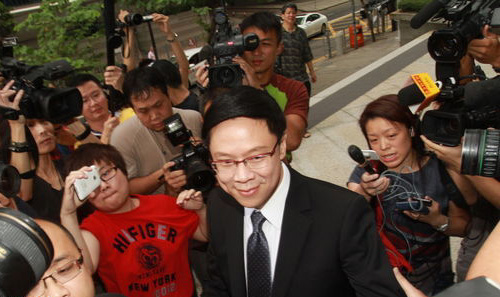 TVB’s General Manager, Stephen Chan (陳志雲), has been acquitted of bribery and fraud charges. He will regain his full authority upon his return to TVB. With Stephen’s return, the probable change  in TVB’s higher management hierarchy system became a growing concern.

During his entanglement in the case for the past 18 months, Stephen’s “beloved generals” under his camp were rumored to have their jobs lessened due to the loss of Stephen’s powerful backing. The first to bear the brunt of Stephen’s previous fall from power was Wong Hei (王喜), who stuck with Stephen through thick and thin. Wong Hei had suffered in grief when he was asked to compensate TVB in order to terminate his contract with them early.

Now that Stephen was vindicated, “Stephen Chan’s camp” may see a reversal of fate anytime now. Patrick Tang (鄧健泓), who addressed Stephen as “Honey”, excitedly shouted, “Mr. Chan is a free man now!” On the other hand, Wong Hei, who obviously felt much more relieved now, had a huge smile plastered across his face. Apart from receiving a public display of gratitude from Stephen Chan, Wong Hei also received many congratulatory messages from netizens that he had not waited and stood by Stephen in vain.

Ever since Stephen Chan was implicated in a law suit and lost his managerial power, some members of the “Stephen Chan’s camp” saw a significant drop in their jobs, such as Patrick Tang and Louis Cheung (張繼聰). Out of these members, Wong Hei was the most loyal and faithful as he didn’t forsake Stephen and even stuck by his side during those turbulent times. Besides buying pomelo leaves for Stephen to wash off the bad luck, Wong Hei even became an umbrella-bearer and accompanied him to court. As he stuck with Stephen through thick and thin, it was heavily rumored that, as a result, Wong Hei did not receive a contract renewal from TVB. Without Stephen Chan’s support, Amigo Chui (崔建邦) was fired upon making mistakes and had to change occupation to become a lowly-paid filming assistant and work his way from the bottom once again.

Wong Hei Sleepless Before the Hearing But Smiled Contently Afterwards

After Stephen Chan’s corruption case was settled, he could, at any time, be involved in managing the artists’ external affairs once again. Apart from having a bunch of his “beloved generals” who were happy for him, the future ahead looked optimistic for “Stephen Chan’s camp” too. On the eve of the lawsuit, Wong Hei left a message on Weibo at 3:45 AM in the  morning and revealed that he was suffering from insomnia and couldn’t get to sleep. At 7:50AM in the morning, while on the way to court, Wong Hei uploaded a photo of his troubled face on Weibo, clearly worried over the lawsuit of his good friend Stephen.  Wong Hei’s distress persisted all the way until the verdict cleared Stephen of all the charges. At 1:48PM in the afternoon, Wong Hei uploaded a photo of himself in a grocery store, wearing a bamboo hat and holding a bamboo fan. In the photo, Wong Hei appeared in high spirits and wrote, “Clear skies after a dark cloud.” In the word “cloud,” Wong Hei replaced it with a letter of Stephen Chan’s name (雲) hence giving the impression that he was also trying to say that Stephen’s darkest moments are already over (雲過天青). It was however not known whether Wong Hei had bought pomelo leaves for Stephen Chan to bathe in again.

It was most interesting to note that netizens congratulated Wong Hei more than they had congratulated Stephen Chan. Netizens praised Wong Hei for being loyal and faithful, while wishing that Wong Hei will receive good returns and will be rewarded for his efforts. Besides that, they also hoped that Wong Hei will renew his contract with TVB as soon as possible. When Wong Hei accepted an interview, he responded, “Mr. Stephen Chan had already expressed his feelings to everyone. I don’t have anything else to add (onto his words). We will continue to work and lead our lives as per normal. Thank you everyone.” Asked about netizens’ wishes that he would renew his contract with TVB as soon as possible when they congratulated him previously, Wong Hei declined to respond.

Patrick Tang expressed that he was exhilarated by Stephen Chan’s acquittal. Yesterday before performing a theater drama on stage, Patrick happily accepted an interview and said, “I’m happy because Mr. Chan (Stephen) has been acquitted of all charges. It’s priceless to be able to regain one’s freedom. He is not only my talent scout but also my mentor who have taught me many things. Many colleagues also support him, gathering everyone’s sense of justice to have such a fair verdict. Patrick mentioned that in the morning when a friend told him about the good news, he repeatedly and excitedly shouted at his friend, “Mr. Chan is free! Awesome!” Asked whether he would ask Stephen out for dinner to celebrate, Patrick revealed that he would have meals with Stephen on a monthly basis in the past, chit chatting about life-related matters. Thus, if Stephen invited him for a celebratory dinner, he would definitely attend it. Patrick also said that he had already sent him a text message yesterday to congratulate him. With Stephen Chan’s rise in power again, will it mean more jobs for Patrick? Patrick replied that he actually has plenty of jobs this year and these include filming of dramas, theater performances and other projects but will continue to work hard and hoped to gain recognition from everyone else.

Steven Ma: “The Legislative System of  Hong Kong is Impartial”

Steven Ma (馬浚偉) was happy for Stephen Chan and felt that the legislative system of Hong Kong was impartial. Steven also hoped that Stephen will continue to lead the company to better developments upon his return to “office.” Yesterday after Steven sent a text message to ask after him, Stephen followed up with a “thank you” reply.

Coson Leung (寧進) who had earlier been invited to ICAC to assist in the investigations, expressed on Weibo last night that he believed Stephen and others will turn out fine and even used Stephen Chan’s golden phrase, “What is true cannot be fake; what is fake cannot be true; you guys will definitely be alright.”

Yesterday night, Louis Cheung attended a basketball competition commercial event. Louis expressed that he had already sent a text message to ask after Stephen and was happy for him as a friend. Since everything has come to an end, Louis hoped that Stephen will continue to be happy in life. Asked whether he hoped that Stephen will help him out by increasing his jobs in TVB, Louis responded that he worked hard at any opportunity that was given to him. He also remarked that he usually equipped himself well. For example, the previous time when he was rumored to be “frozen,” he just tried his best to complete each job well. Louis Cheung’s wife, Kay Tse (謝安琪), also revealed that Stephen replied to her message, saying that he hoped everyone could come together for a gathering.

Another of Stephen Chan’s “beloved generals,” Snow Suen (孫慧雪), returned to TVB City yesterday. When interviewed, Snow replied, “Congratulations to Mr. Chan. Most happy that everyone was alright and everything was successful.” (Reporter: Do you wish to work with Stephen again?) “Only if the company is okay with such an arrangement. I also wish to have more jobs on hand.”

17 comments to The Rebirth of Stephen Chan and Reversal of Fate for His Supporters?