After the success of Barrack O’Karma <金宵大廈>, Selena Lee’s (李施嬅) popularity rose even higher. Aside from recognition for her role, Selena’s past relationship with actor Patrick Tang (鄧健泓) may have left the deepest imprint in viewers’ minds. In a recent interview, Selena spoke about dating Patrick for five years, and how it was difficult to break up because being together had become a habit. 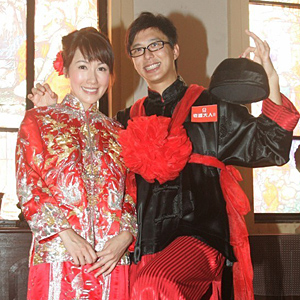 Raised in Toronto before returning to Hong Kong to compete in Miss Hong Kong 2003, Selena worked at TVB for 16 years. In 2004, Selena started dating Patrick Tang. After breaking up, they are still friends.

While together, Selena knew that they were not compatible but she did not want to let go of such a long relationship. She said, “I used to love dating, but now I don’t really mind [being single]. I guess I just liked the security you get in a relationship. To be honest, he was never my type. He is very artistic, caring, and detail-orientated, but we just didn’t click. That year, my father’s business failed, and I was moved by [Patrick’s] concern. We really shouldn’t have been a couple because of our incompatibility. In those five years, I wasn’t happy and there was a lot of negativity in our relationship. But I couldn’t let go even though my friends said there wouldn’t be any future for us. It was just hard because we lived together. However, we finally let go when I went back to Canada for school.”

Recently, it was said Selena has a boyfriend from outside the industry. Denying that she prefers to date the rich second generation, she said, “As long as it is someone who can accept my flaws and my career-oriented personality, that is fine with me.” As a member of the Nonsense Club, she also hopes that Nancy Wu (胡定欣) and Elaine Yiu ( 姚子羚) also find their significant others because they are both strong women who deserve partners to love them truly.

Not being Slick Can Be Hard in the Industry

While Barrack O’Karma received great reviews, it was also Selena’s last drama with TVB. She admitted that networking was not her strength, which has affected her career. Citing that her decision to change her Chinese name had angered management since it was already late in her career, Selena did it anyway in memory of her grandmother who has always wanted that name for her. “Everyone thought I was brainless…but I didn’t care. I felt that I had angered others; maybe that’s because I’m not smooth enough.”