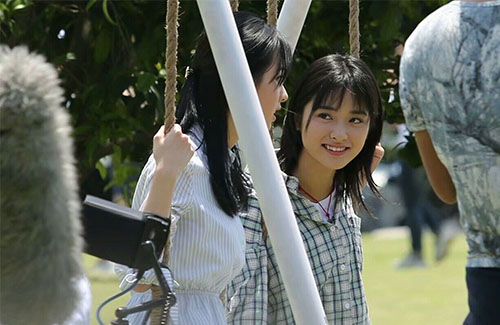 For months, the media reported that Zanilia Zhao (赵丽颖), also known as Zhao Liying, will be headlining the TV drama version of Soul Mate <七月与安生> alongside Zheng Shuang (郑爽). It turns out, after all, that those reports were either unfounded rumors or just a cast that had failed to come together.

Soul Mate, a Derek Tsang (曾國祥) film which was released in 2016, starred Zhou Dongyu (周冬雨) and Sandra Ma Sichun (马思纯) as two close friends who share an unbreakable bond. The film was a commercial and critical success; both Zhou and Ma also won Best Actress together at the Golden Horse Film Awards in Taiwan, a first in its history.

Recently, a few netizens discovered that the TV adaptation of Soul Mate has already secretly begun filming, and that the two leads are portrayed by new actresses Shen Yue (沈月) and Chen Duling (陈都灵). 21-year-old Shen Yue is best known for starring in the popular web drama A Love So Beautiful <致我们单纯的小美好>, and for playing Shancai in the official Meteor Garden <流星花園> remake, which just completed filming. Shen Yue will be playing Zhou Dongyu’s role “Ansheng”.

Chen Duling, on the other hand, made her debut in the 2015 film The Left Ear <左耳>, which starred Sandra Ma. In Soul Mate, the 24-year-old actress will be playing Sandra’s role “Qiyue”.

As for the male lead, netizens said they spotted 25-year-old actor Dylan Xiong Ziqi (熊梓淇) on the film set.