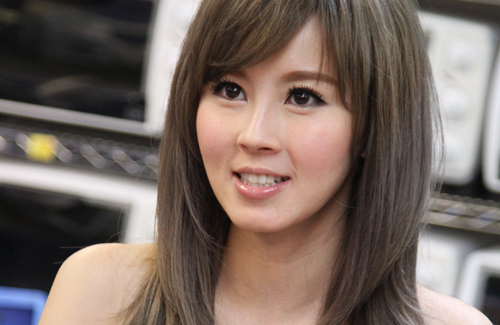 In 2011, Theresa Fu (傅穎) had cried victim to ex-boyfriend Him Law‘s (羅仲謙) battering and revealed her severe butt bruises to the media. It was reported that Him had “grabbed her too roughly” and gave Theresa the bruises during an argument. Since both artistes were signed under Filmko Entertainment, the company decided to separate the ex-lovers to play down the scandal. Theresa was sent to Beijing to develop her Mainland career while Him remained in Hong Kong. Over the last three years, Him’s acting career made great strides and turned his image around after dating Tavia Yeung (楊怡).  Meanwhile, Theresa’s career never fully recovered.

Theresa was pegged as an annoying and troublesome artiste to work with. Many who worked with Theresa nicknamed her “Queen of Complaints”, as she would often complain about not having enough scenes in a movie, or whine about the scripts. Theresa sought to find jobs for herself without consulting Filmko, while often saddling them with personal and non-work related problems.

Filmko has reportedly decided to end Theresa’s management contract three years early. Theresa does not seem to mind and claimed that the Filmko favored ex-boyfriend Him over her anyway.

Now without a contract, Theresa updated her Weibo profile description, indicating that she is willing to take on any job she is offered. Dropping her diva image, Theresa even took initiative in contacting various companies for potential work opportunities. She was seen having dinner with director Gordon Chan (陳嘉上) and openly praised his work. Even more shocking was that she took a picture with long-time nemesis Ronald Cheng (鄭中基), whom she was rumored to be on bad terms with. Widening her options, Theresa also allegedly contacted Chrissie Chau’s (周秀娜) management company, GME, only to be shot down.