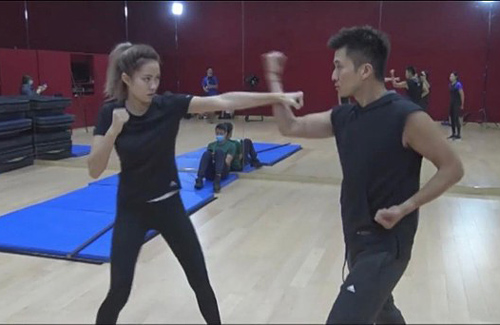 As the filming for Power Envoy <超能使者> begins, Tiffany Lau (劉穎鏇) and Joel Chan (陳山聰) have been working hard in learning kung fu and the handling of martial arts weapons to prepare for their fight scenes. Results are already showing, and the onscreen couple is making good progress in their training.

Working again with TVB producer Jazz Boon (文偉鴻) in Power Envoy, Tiffany is used to his high expectations from the cast, especially the frequent action scenes involved. Tiffany said, “The producer is very nice. He organized martial arts classes for us so that we can learn the movements.”   When asked if the process is tough, she responded, “It is okay. When we were filming Fist Fight <兄弟>, we also had martial-arts-related scenes, so it’s not too difficult. But I want to make the poses look good, and the forms are also different [in this drama]. Before this, I haven’t tried doing so many kicks. I’m not too flexible, so I have been stretching.”

Seen throwing fast punches during the class, Tiffany also had to quickly dodge her opponent’s movements. Although the action choreographer tried to accommodate her, she still got bruised without realizing it. “During the real filming, I can’t use pads. Since I wear crop tops and shorts throughout the entire drama, I will have to let the choreographer guide me.”

1 comment to Tiffany Lau Trains for Her Action Scenes