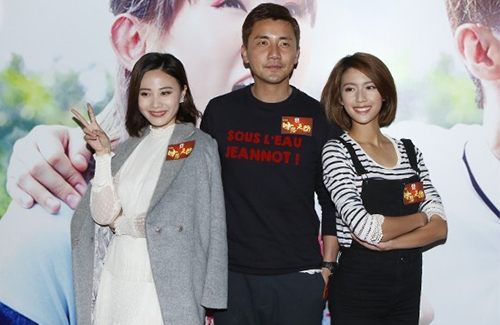 After an ambiguous social media post made by Natalie Tong (唐詩詠) last week, rumors started flying about her possible breakup with Tony Hung (洪永城). Though Natalie has denied having problems with Tony, rumors continue to claim that they have split, with one tabloid “exclusively” revealing that Natalie broke up with Tony via WhatsApp.

Tony responded to the rumor at a promotional event for his TVB drama Recipes to Live By <味想天開>, which will air its series finale on February 3, 2017. Tony reacted to the rumor in good spirits, and said with a smile, “The news made it sound serious, but our relationship is fine. Thank you for the concerns. These rumors are making it very dramatic, but we are okay, and very comfortable. Please stop making up stories.” (Is it true that you guys are cooling off?) “No. We’ve always been normal.” (Rumors say Natalie broke up with you on WhatsApp.) “Do they have a screenshot? How can they claim it happened without the evidence? You’re all very imaginative.”

The 33-year-old actor said he and his family will be eating dinner with Natalie’s family on Lunar New Year. As if they’d discuss about marriage, Tony said, “It’s a possibility. If we do have plans for marriage, we will let everyone know.”

At the mention of Lunar New Year, which falls on Saturday, Tony’s costar Sisley Choi (蔡思貝) said she will be celebrating the day with her family. Asking if her rumored boyfriend Shing Mak (麥秋城) will be going with her, Sisley said, “I will be spending it with my grandmothers. Maybe I’ll pay Louis Cheung (張繼聰) a New Year’s visit too.”

Costar Rebecca Zhu (朱晨麗), on the other hand, will have to work on Saturday. Sharing that her mother loves daffodils, Rebecca purchased an entire vase of them at the night market yesterday.

In regards to the rumor that Tony and Natalie had split, both Sisley and Rebecca said they wouldn’t believe it. “They’re very sweet,” said Sisley.

“They’d watch movies with us too,” said Rebecca. “It’s just rumors. A gimmick.”