Wedding bells might be ringing for TVB actor Tony Hung (洪永城) and his model girlfriend, Inez Leong (梁諾妍), who is also a part-time fitness trainer. According to sources, Tony plans to spend over one million yuan renovating his 11 million yuan home, which he bought during the time he started dating Inez at the end of 2018. With plans to turn his home into a love nest, the 36-year-old Tony hopes to start cohabiting with Inez to test out their marriage compatibility. 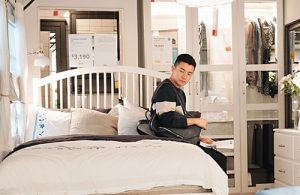 Not too long, he was spotted carefully choosing and purchasing home goods, including a huge double bed and essential bathroom products. After shopping for household items, Tony entered a jewelry store to buy a woman’s bracelet. Perhaps it is his Valentine’s Day gift to his girlfriend. Later, the actor went to the market to buy groceries.

At a recent event, reporters asked him if he’s afraid of breaking up after cohabiting, like Crystal Fung (馮盈盈) and her ex-boyfriend. With great confidence, he responded, “This is a stage that every couple has to experience; it’s important to accept your partner’s merits and flaws. Even if we don’t match, we still have to face it courageously.”

However, Tony constantly sings Inez praises. He would smile non-stop at the mere mention of her name, and he even said he would need two hours to list all her merits. He revealed that they’re compatible in many aspects, such as being easy to communicate with and sharing similar interests in exercising.

Tony also hinted that marriage is on his mind, as he expressed, “A good husband must be able to take charge, have a sense of responsibility, and take care of the feelings of the people around you. I think I’m ready to be one.”