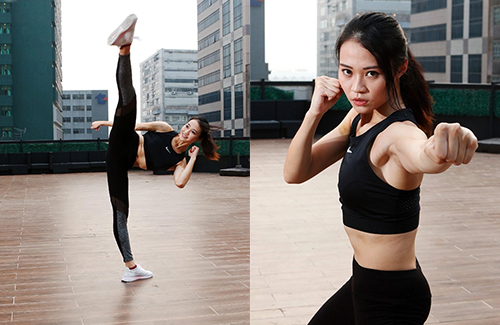 Actress and stuntwoman Mandy Ho (何佩珉) has had over 20 years of martial arts experience. The 27-year-old, who made her debut in the industry through the 2011 TVB audition program Kung Fu Supernova <功夫新星>, is a master in the Choy Li Fut, and trained with the Hong Kong Wushu Team when she was in elementary school. “Bleeding is no big deal,” she said. “No matter what, you have to be able to withstand the pain!”

In TVB’s The Defected <鐵探>, which will air its last episode next week, she plays Kong Lai-yiu, the sidekick of the show’s man villain “Camp Leader” (played by Berg Ng 吳廷燁). The Defected may be Mandy’s first major role since joining TVB in 2011, but her resume stretches far beyond acting and saying a few lines.

Over the years, Mandy has taken part in many television dramas and films as a stuntwoman. She has performed stunts for Charlene Choi (蔡卓妍), Annie Liu (劉心悠), Linda Chung (鍾嘉欣), Natalie Tong (唐詩詠), Rebecca Zhu (朱晨麗), and many more. Mandy is passionate for her career, and is blessed with the opportunity to tackle new challenges every time.

Mandy recalled her first job as a stuntwoman, “I was told that I’d only be doing a couple of fight scenes, but it turns out that I had to climb over a blockade and then fall down a long line of stairs. I didn’t had all the necessary equipment at the time, but I still went over it. We finished it all in one take. Everyone in the crew applauded. It was my first time receiving an applause after doing a scene, so it was unforgettable!”

Sustaining injuries are quite common as a stunt performer—bruises, cuts, skin tears are all minor issues. “Bleeding isn’t considered a big issue either, just as long as you don’t hurt any bones and joints. There was a time when I heard my pelvic bone snap, but I didn’t want to tell the choreographer and affect the filming, so I continued. As a stunt performer, you have to be able to handle pain.” 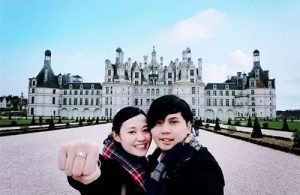 Working in the entertainment industry, many would hope for a chance to be part of the spotlight, but Mandy is content of staying in the background to perform stunts. She loves her job, saying, “Acting comes with being a stunt performer too. Each character is different as each fighting style is different. I love being an actress and a stunt performer. I get to dab in both and incorporate both skills in my job.”

Earlier this, Mandy married her longtime boyfriend Morriz, an engineer. Morriz was trained in gymnastics and wushu when he was younger, so he is very aware of what Mandy does for a living. Morriz has always been Mandy’s emotional support and backup—whenever she sustains an injury from work, Morriz will always be around the corner to help Mandy take care of it.

Due to the nature of their jobs, Mandy and Morriz rarely have time to spend together, but she shared that she would write her husband a letter at least once a month to maintain their relationship. “When I was younger, I’d write cards to my parents. I’m used to writing more than talking more. I can get pretty cheesy!”