TVB and CTI Compete for Most Controversial Scenes 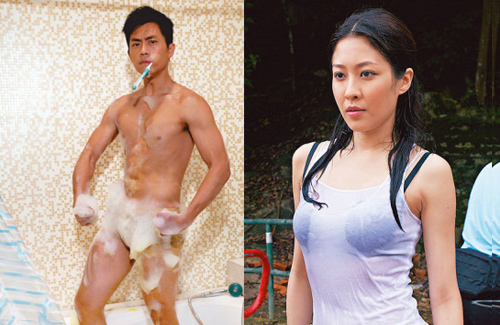 TVB may be facing its worst enemy yet with the rise of the new Hong Kong television station, City Telecom (CTI). Although CTI has yet to obtain a free broadcast license from the government, the new station is already attracting international attention with the release of the teaser trailers for CTI’s upcoming television dramas, which features many controversial topics and daring scenes.

In a recent episode of the family-friendly sitcom, Come Home Love <愛·回家>, Hong Kong model Snowy (白雲), a guest star, almost exposed her large 35E cups when costar Joey Law (羅天宇) tried to help her zip up her jacket. Divas in Distress <巴不得媽媽…> surprised the audience with a hilarious bra-wrap scene that involved Eliza Sam (岑麗香) pulling out her own bra so Chin Ka Lok (錢嘉樂) could use it as a temporary arm cast.

Legal drama, Friendly Fire <法網狙擊>, is set to premiere on December 18, replacing the time slot for The Confidant <大太監>. The drama will pick up Silver Spoon, Sterling Shackle’s flavorful theme by including some controversial scenes of its own, which includes the female leads flaunting their curvy figures and featuring a naked Sammy Leung (森美).

As the drama’s main villain, Alice Chan (陳煒) will show her seductive side by appearing in numerous bikini scenes. Supporting actress, Grace Wong (王君馨) will also show off her curvy figure by wearing skin-tight clothing to seduce main lead, Michael Tse (謝天華). Sharon Chan (陳敏之), known for her 42-inch legs, will also have scenes of her showing her bra under a wet shirt.

But most of the attention will likely be directed at Sammy Leung, who decided to “strip naked” for a bath scene. The scene involves Sammy finishing his bubble bath while Sharon Chan helped him get his clothes. When Sharon entered the bathroom, Sammy stood up, completely naked. For the scene, Sammy wore nothing but tight, white-colored briefs. During filming, Sharon could not get over how small Sammy’s nipples were, and in the end, Sammy decided to cover his nipples with soap bubbles so Sharon could stop laughing.

“The [daring bath scene] was for comedic purposes!” Sammy explained. “For this role, I spent many months training in the gym. When we were about halfway into filming, the producer noticed that I lost over 20 pounds and was looking very fit. He didn’t want to waste my efforts and decided to include the bath scene so I could show off everything! It wasn’t a very comforting scene though. I spent hours and hours in the bubble bath, and I could not seem to get that slimy soap feel off my skin. When I got back home that night, I had to take several showers to rub off that feeling.”

Producer Man Wai Hung (文偉鴻) explained that the daring scenes in Friendly Fire were not because of CTI’s influence, and said, “Sammy’s bath scene was meant to be very funny. I would not call it controversial. As for the sexy female characters, it is required for the story. When we first filmed Friendly Fire, CTI’s sales presentation trailers were not released yet, so it has nothing to do with them.”

Source: Next Magazine #1188 via ihktv.com

21 comments to TVB and CTI Compete for Most Controversial Scenes