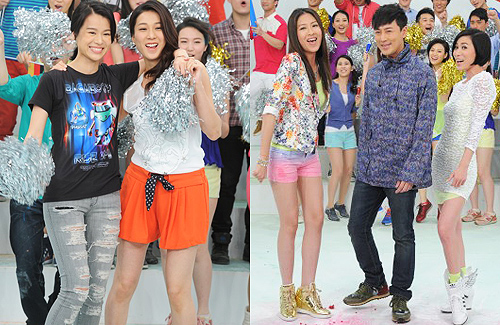 After receiving live broadcasting permission of the 2014 FIFA World Cup Brazil, TVB recruited its artistes to help promote the event, which begins on June 12. To foster more noise and publicity, the station filmed a music video that will air in an upcoming episode of Scoop <東張西望>.

Raymond showed off his “chok” looks as Charmaine and Sharon Chan (陳敏之) festively circled around him. When Krystal Tin (田蕊妮) appeared, Wong Cho Lam (王祖藍) and Louis Yuen (阮兆祥) suddenly popped out to join her in a hilarious warm-up dance. Cho Lam wriggled around with half of his jacket draped on, while Krystal was also in high spirits. Standing next to them was Kenneth, who is known as being shy and thus initially appeared awkward in the situation. However, he later joined the masses and dance along.

Edwin teamed up with beauty pageant winners Grace Chan (陳凱琳) and Eliza Sam (岑麗香) in an energetic dance. Meanwhile, Priscilla partnered up with good costar, Tony Hung (洪永城). In addition, a group of artistes from both The Voice of the Stars <星夢傳奇> and The Voice <超級巨聲> sang songs to show off their musical talent. Among the group were Grace Wong (王君馨), Fred Cheng (鄭俊弘), Ronald Law (羅鈞滿), Hoffman Cheng (鄭世豪), Hubert Wu (胡鴻鈞), Alfred Hui (許廷鏗), and Jinny Ng (吳若希).

This article is written by Shirely for JayneStars.com.