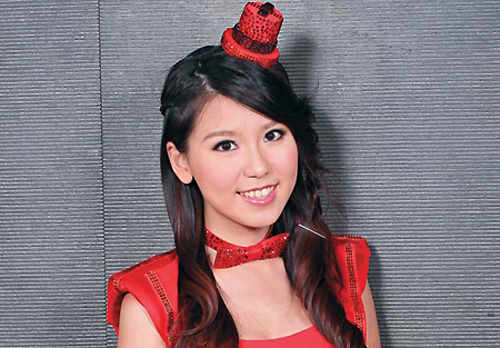 After two days of searching for the person who had filmed and leaked Jenny Lau’s (劉蔚萱) maltreatment by director, Cheung Wing Ho (張永豪), the “culprit” has finally been found! Reviewing security camera tapes, TVB spotted a production staff member who had filmed the incident on his cell phone on that fateful day.

The public and artist community were enraged after watching the video clip of director Cheung Wing Ho dropping a foul smelling bag over Jenny Lau’s head and subsequently shoving her forcibly against the wall on the set of Heart Road GPS <心路GPS>, making the newcomer collapse in distressed tears.

Cheung Wing Ho said that his method of teaching newcomers how to act was not a problem, but admitted to apologizing to Jenny Lau over the incident.

Yesterday, rumors surfaced that Jenny may be punished for being a suspected “whistle blower” and generating negative publicity for TVB. Heart Road GPS producer, Lee Yim Fong (李艷芳) assured that Jenny’s scenes will not be cut from the drama. Ms. Lee said, “It’s not a big deal,” while continuing to protect Cheung Wing Ho. “The public community has been scolding the director, but  they are doing so without knowing the entire story. It’s not fair to do so!”

Jenny Lau was spotted returning to work at TVB City yesterday. Visibly shaken by the media’s presence, she said, “Thank you for your concern,” before heading into the studio and refraining to comment further on the scandalous incident.

TVB had considered filing a police report towards the source of the leaked video clip taken on the set of Heart Road GPS. Since the clip was taken in a rehearsal scene inside the filming studio, it may involve the theft of copyright issues. TVB finally decided not to magnify the scandalous situation and will not report the case to the authorities.

Yet, TVB did not undermine the gravity of the situation. TVB executive, Au Wai Lam (區偉林) , visited the set of Heart Road GPS. Halting the filming for two hours, Mr. Au met with the cast and crew, announcing that they have found the person that had leaked Jenny Lau’s video clip. The “culprit” is suspected to be one of the staff members on duty in the studio production control room on that day. In security camera tapes, the staff member was seen recording the clip with his cell phone during the rehearsal.

Mr. Au’s words apparently warned that TVB will have a zero tolerance policy towards future violators of  “theft of copyright.”

Jayne: From the stance Catherine Tsang took in the press conference, it was obvious how the incident would conclude. The staff member who had leaked the video clip will be rebuked or worse yet, may be fired.

Jenny Lau still has her job, but her fate may be forever sealed.

It is similar to how certain companies handle employee complaint cases, such as sexual harassment. Some companies do not wish to foster a truly equal fair treatment of all employees and there would be eventual ramifications for the  “whistle blower” to be felt down the road.