TVB drama Brutally Young <十八年後的終極告白> has become the late-night snack series that many netizens don’t mind staying at home for.

Produced by Simon Wong (王偉仁), the 20-episode mystery thriller centers on a murder that had occurred 18 years ago: seven teenage boys get into a fight with a local gangster, resulting in the gangster’s death. 18 years later, the body of the gangster is discovered from a car accident, and the seven boys—now well into adulthood—have to face the consequences of their actions.

Praised for its gripping storyline and strong characterization, Brutally Young is being hailed by netizens as Hong Kong’s “legendary drama” of 2020. Although the drama isn’t airing in mainland China, the series received an 8.5 out of 10 rating on China’s entertainment database Douban. The last Hong Kong TV drama to receive a rating over 8 was 2019’s Barrack O’Karma <金宵大廈>, which received a rating of 8.3 out of 10.

Hong Kong netizens have commented that Brutally Young is reminiscent of the highly-acclaimed 2011 TVB drama When Heaven Burns <天與地>, which had also dealt with the aftermath of a murder.

Shaun Tam (譚俊彥) plays Sam Lam, a senior accountant and one of the seven boys involved in the murder. Intelligent and resourceful, Sam is a morally gray character who flips back and forth between selfishness and righteousness. Once critically panned for his wooden acting, Brutally Young is shining a new light on Shaun, with netizens praising Shaun for his good portrayal of Sam’s ambiguity. 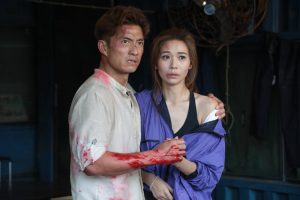 Joel Chan (陳山聰)—who also starred in Barrack O’Karma—plays Ah Yat, also one of the seven boys. Despite being an aggressive triad leader, Ah Yat is extremely loyal and stands up for justice. His romantic subplot with Ah Sin (portrayed by Vivien Yeo 楊秀惠), who is deaf and mute, is a compelling part of the series. TVB-style romantic subplots have never been regarded highly by netizens, but Ah Yat and Ah Sin’s subtle romance adds more humaneness to the otherwise dark tale.