Set in the 1960’s, the action comedy centers on the martial artists living in Bangkok’s Chinatown. The cast will be flying to Bangkok, Thailand for some additional photography.

Ruco shared that he had to lose over 10 lbs for his role. Though he has always maintained his weight, having a pregnant wife at home had been a good excuse for him to eat more.

“I was never this heavy before,” said Ruco, who is married to Phoebe Sin (單文柔). “I was wondering why my face still looked so bloated after makeup. It wasn’t until I weighed myself when I realized! I managed to lose 10 lbs in a month.”

On why Ruco suddenly gained all of that weight, he smiled and said, “I’m sure the Lunar New Year holidays had something to do with it, but my wife now has to eat for two people. My wife loves eating western food, and I have to eat with her. I’m not trying to blame [the weight gain] on anyone, but western food is pretty fattening!” Ruco shared that Phoebe will be giving birth in March,

Ruco has many action scenes in the drama, including a major fight scene with Joel Chan on a lei tai (fighting arena). The Best Actor winner is not concerned about sustaining injuries, as both Yuen Qiu and Philip Ng are around to supervise and add support. “Fight scenes are actually the safest,” said Ruco. “Most of the injuries would come from doing wire stunts.” 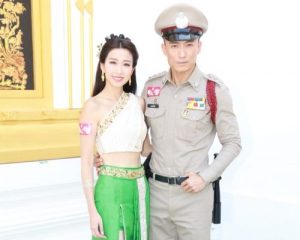 Reuniting as an on-screen couple, close friends Joel Chan and Elaine Yiu play a pair of star-crossed lovers. Passionate kissing scenes are not a problem for the duo, and they have numerous intimate scenes. Ruco joked that his relationship with costar Natalie Tong will be much more subtle.

Chinatown has been a challenging drama for Elaine. Her story arc is packed with action events—after defeating one person, she has to defeat a group of 10. She has to do many wire stunts, including cliff jumps, sea dives, and one scene where she had to save Joel.

Joel doesn’t have it any easier. His character specializes in Wing Chun and Muay Thai. The lei tai scene took months to prepare, and his diet suffered as a result. While his male costars could only eat boiled eggs, chicken breasts, and brown rice, many of his female costars were able to entice them with chips and chocolate.