Vanessa Yeung Does Not Mind Criticisms from Boscolie Fans 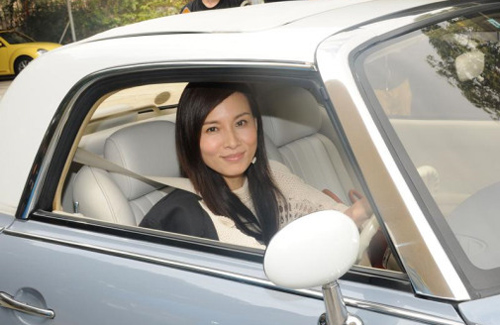 A horde of reporters approached Vanessa Yeung (楊崢) after she finished recording a talk show program for Commercial Radio. Vanessa admitted to dating 33-year-old Bosco Wong (黃宗澤) after she was photographed kissing the actor intimately earlier this week.

Shocked at the sight of the reporters, Vanessa quickly composed herself before calmly responding to press questions. Regarding the exposure of her dating relationship, Vanessa said, “I do understand that everyone is concerned. We are ordinary people, and we want to live by an ordinary lifestyle.” As for plans for Valentine’s Day, Vanessa said that they may be working on that day.

Asked if she and Bosco will continue the public displays of affection, Vanessa laughed, “For now, I don’t think we’ll be doing that in the next few days.” The couple will not intentionally maintain a high profile relationship, stressing that they will keep doing what they usually do. “We have nothing to hide and we will stay true to ourselves. I really don’t know why people are suddenly so concerned about us, but thank you for your blessings.”

Some netizens expressed their disappointment at Bosco and Vanessa’s relationship, with many saying that they find Bosco to be a better match with his ex-girlfriend, Myolie Wu (胡杏兒). Vanessa said she does not feel unhappy about the comments, saying, “I absolutely respect the netizens’ opinions.”

The media reports that Bosco and Vanessa have already met each other’s parents, adding that chances of a flash marriage are not low. However, Vanessa immediately turned down that rumor, saying, “That’s too quick.”

Publicizing their romance after only a few months of dating, many of the couple’s friends expressed their shock at the quick revelation, noting that it took Bosco and Myolie six years before admitting their relationship to the public.

At TVB studios yesterday afternoon, reporters crowded around Bosco, who had just completed the official poster photoshoot for his upcoming TVB dram. He briefly responded, “Don’t give us too much pressure. We want to peacefully develop our relationship.”