When it comes to love, fate prevails over age and background. This is the case for 39-year-old director Derek Tsang (曾國祥) and 27-year-old actress Venus Wong (王敏奕) . Despite being 12 years apart and coming from different family backgrounds, the couple of six years are said to be in a stable relationship and even started cohabiting last year. Today, news broke that Venus and Derek allegedly tied the knot in Japan in secrecy.

The couple met through Derek’s father, Eric Tsang (曾志偉), who has always recognized Venus as his future daughter-in-law. Having easily integrated into the Tsang family, Venus affectionately calls Eric her father-in-law, and often tags along on family trips. Although Derek once said he doesn’t care for marriage, he’s had a change of heart since meeting Venus. Thus, the reports of them getting hitched in Japan come as no surprise. However, when reporters reached out to the lovebirds and Eric for comment, they did not pick up their phones.

Instead, the media was able to contact Derek’s older sister, Bowie Tsang (曾寶儀), but she neither confirmed nor denied the marriage rumors. She only said, “It’ll be better for them to answer.”

Having dated for quite some time, reporters often inquired the couple about their marriage plans, but they always said they were focusing on their careers first. Venus has been in the business for 13 years, as she started modeling at just 14. Since then, she’s turned her attention to acting and studied film and drama in New York. In 2014, she finally gained some recognition for her performance in the TVB drama, Never Dance Alone <女人俱樂部>, and was labeled as a goddess. 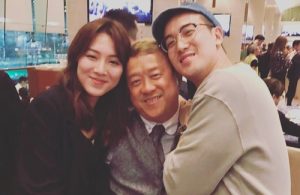