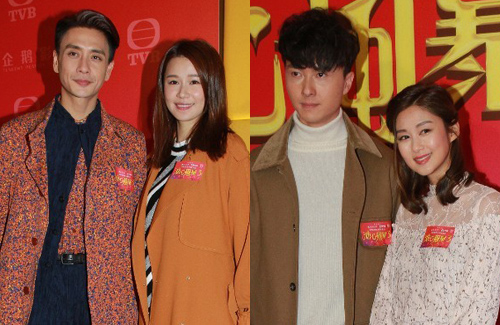 Heart and Greed will continue to focus on the theme of epic family dynamics, but this time, in the realm of the food industry. This drama marks Vincent and Eliza’s second onscreen collaboration after Brick Slaves <樓奴>. Portraying a couple in the series, Eliza was asked whether her husband, Joshua, is accepting of her filming intimate scenes. Eliza clarified, “I am an actress. This is a part of my job. If there are any intimate scenes, I would let him know and communicate with him. It also depends on the drama’s needs.”

Eliza admitted feeling immense pressure filming with a group of respected veterans. Vincent has become Eliza’s encouragement counselor. He shared, “She is always questioning herself about whether she is doing a good enough job. She lost her confidence. I told her that the most important thing is for her to do her best.”

Eliza added, “Because we just started [filming], I need to have a deeper understanding my character, so I wasn’t sure if I was doing it correctly. I hope to share more with everyone and perform better.”

Vincent joked that since the majority of filming has occurred at a Chinese tea restaurant, their meals have been much better than the usual takeout. However, the 33-year-old actor bemoaned that he has gained weight. Eliza laughed and joked, “Then I’ll eat your share for you!”

Bosco, on the other hand, has lost weight because he has been suffering from the stomach flu recently, causing him to often have stomach pains. When he shared a body building photo recently, good friend Edwin Siu (蕭正楠) left a message and teased, “Be careful of pushing [feces] out.” With Edwin’s girlfriend, Priscilla, standing beside him, Bosco admonished, “Tell your family members not to have such dirty thoughts! Always thinking about things like feces and urine.” Priscilla laughed and said, “Got it, got it. It has nothing to do with me!”