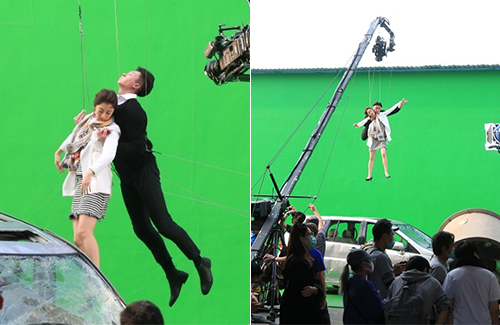 The scene focuses on Vincent, who reprises his role as the blind lawyer Hope, saving Jan from drowning. Both actors were wired up and shot the scene in front of a green screen. It is definitely a lot more challenging than it looks.

“I’ve done underwater scenes before. I’ve done wire scenes before,” said Vincent. “But not when you combine the two. To pretend that you’re swimming underwater in the air actually requires some skill. You have to keep in mind how you move and how you breathe underwater.”

It was a very challenging sequence, but Vincent said he prefers doing that than actually going underwater. “At least it’s not as dangerous,” he said.

After filming the sequence, Vincent said he felt like he had already used up 70 to 80 percent of his energy. “We were filming the entire day, and I’m tired out. However, I’ve been working with the action choreographers for many years, and I absolutely trust them.”

Jan is unconscious in the scene. Asking if it felt because Vincent was doing all the work, she said, “This is actually my first time doing wire work. I wasn’t resting. I had to do certain movements to save Vincent some strength.”