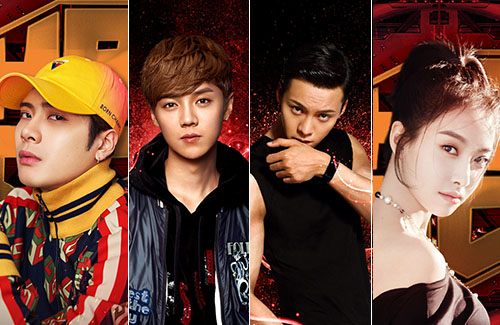 Presented by the producers of The Rap of China <中国有嘻哈>, the dance-based variety show Hot-Blood Dance Crew <热血街舞团> has been in production and is set to air in March 2018. The hip hop dance survival show, also known as HBDC, features Lu Han (鹿晗), GOT7’s Jackson Wang (王嘉爾), f(x)’s Victoria Song (宋茜), and William Chan (陳偉霆) competing against each other with their intensive street dance choreography.

While promoting the show, the four leads have expressed their concerns and hardships while filming for the show. 27-year-old Lu Han, who earned his dance experience from his gig as a former EXO member, made a sarcastic comment about his old age preventing him from being as energetic as before. “During my rehearsals, I definitely felt my older age kicking in. I felt like I couldn’t dance as lively as before. Although I’d get really excited, sometimes I feel that I can’t keep up.”

William admitted that he cried right after filming the first stage for the show. Calling the show “cruel”, the 32-year-old said, “[The contestants] should always be prepared to accept their results. I hope they’ll understand that it doesn’t matter if you win or lose. When I filmed the show yesterday, I couldn’t help but to break down and cry. I was worried that they would start fighting amongst themselves. This show is too cruel.”