The actress reveals that she is ready for love and doesn’t mind dating younger men.

Enjoying a blossoming career, Alice Chan (陳煒) is also hopeful for the Year of the Pig to bring forth a new romantic partner in her life. The 45 year-old revealed that she has visited the famed Tin Hau Temple to pray for divine luck in love.

Last year was a fruitful year for the former ATV actress, who won Most Popular Female Character at the TVB Anniversary Awards her performance in Deep in the Realm of Conscience <宮心計2深宮計>. The award is an affirmation from viewers and a step forward for the actress.

Besides hoping for a smooth-sailing career in the new year, the actress, whose previous marriage with businessman James Yen (顏志行) lasted four years, also hopes to find a suitable partner in 2019. “I have yet to pray for luck in romance, usually requesting good health and good fortune in the past. Today I came especially for the God for Love and hope to meet an ideal partner in the Year of the Pig. I’ve always had the mindset of leaving love to fate, and would place festive flowers at home during Chinese New Year. This year I intend to buy peach blossoms (symbol of blooming love) and see if I would meet someone!”

Alice also hopes for good career fortune and has asked for good interpersonal communications. “No matter how hard you film, it will inevitably take a combination of right time, right place and right people. I hope to receive more help from gui ren (noble persons), and also hope viewers can continue to support me.”

When asked about her dating criteria, looks are secondary for Alice, who emphasizes the importance of compatibility instead. “Having common interests will give us more to share and interact about in daily living; this is what I’m looking out for. Although it’s important to like the person on first impression, yet those who meet this criteria might not be suitable for me. It takes time to understand each other and only if both parties are sincere will there be a chance of serious developments.” When asked if there are potential partners in her life right now, the actress answered that she is getting to know a few male friends better, and hopes (one of them) can be a good fit.

As many celebrities including Stephy Tang (鄧麗欣), Tavia Yeung (楊怡), Miriam Yeung (楊千嬅), and even Nancy Sit (薛家燕) all have partners who are younger than themselves, would Alice mind dating someone younger?

“Being able to communicate well with (him) is the most important. In the past, I wouldn’t date younger men as I have a more mature mindset and am attracted to men who are older than myself. Now I realize many young men can also be quite mature in their outlook and character, so age is no longer an issue.”

When asked about how pursuers can win her over, the actress admits that material goods are secondary to her emotional needs. As she does not lack much materially, she prefers if the other party is caring, sincere and thoughtful towards her.

A Busy Year Ahead 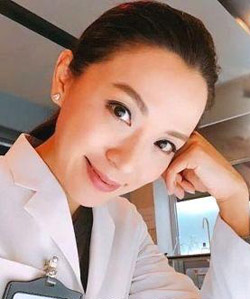 Sharing about her work plans in 2019, Alice has four upcoming dramas. Besides Forensic Heroes IV <法证先锋IV>, she will also star opposite Ben Wong (黄智贤) and Adia Chan (陳松伶)  in the Poon Ka Tak-helmed Good Days <好日子> as well as The Ghetto-Fabulous Lady <福爾摩師奶>. Alice and Miriam Yeung (杨千嬅) will co-star in Wonder Woman <多功能老婆>, a motivational modern romantic comedy. With so many dramas lined up, it is no wonder the actress joked that she will try to make each character’s image more distinctive and hopes viewers will not get bored of seeing her onscreen.

Joining TVB in 2012 during what she called “the darkest period in her life” after her divorce, Alice has more than once expressed thanks to the station for giving her plenty of chances. Winning Most Popular Female Character last year after 22 years in the industry has also made her more popular with sponsors. “The viewer support from Apple-Colada <果欄中的江湖大嫂> which aired early last year and Deep In the Realm of Conscience have brought me many commercial and performance opportunities. As ratings for Conscience were very high in mainland China, I have a new audience market and commercial engagements lined up all the way until March!”