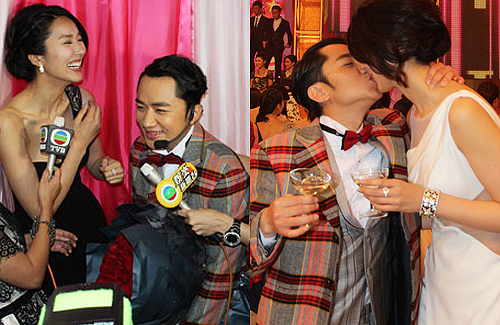 Wong Cho Lam (王祖藍) has been hinting for months that he will give Leanne Li (李亞男) a wedding to remember. He shocked Leanne by proposing to her in front of millions of viewers at today’s TVB Anniversary. When Cho Lam pulled out a three-carat ring,  Leanne cried on the spot and happily accepted his proposal.

“Leanne said she wanted to have a big surprise when I propose. I thought for a long time and decided to propose [at the TVB Anniversary] because everyone is here tonight,” Cho Lam said.

Accompanied by Come On, Cousin <老表,你好嘢!> co-stars Louis Cheung (張繼聰), Bob Lam (林盛斌), and Ram Chiang (蔣志光), Cho Lam walked on stage with a bouquet of red roses. Kneeling down, Cho Lam said, “You and I are different types of people. At first, I was only a children’s program host and you were Miss Chinese International. I’m very short and you’re very tall… Before today, I’ve never been so nervous in speaking. I’m very complex and you’re very innocent. I’m thankful towards God that we’re able to meet. In love, we will experience much turbulence. We weren’t rash in our decision since we were friends and dated for years. I found that our mutual caring and sacrifices proved my belief that no matter how difficult it was to pursue you initially, it would be my lifelong joy if you marry me.”

Consumed with happiness, Leanne immediately took off the ring she was wearing on her finger to replace it with Cho Lam’s diamond ring. Laughing at Leanne’s eagerness, Cho Lam said, “You have to say whether you accept my proposal or not before you take off your ring.”

After Leanne happily said, “I accept the proposal,” her parents joined them on stage and many TVB artistes swamped the couple with congratulations. Cho Lam shouted, “I’m getting married!”

Speaking with the press afterward, Leanne expressed her shock at Cho Lam’s proposal. “I was really surprised! I don’t want to [be so shocked] ever again!” Leanne was surprised to see her parents at the TVB Anniversary, as she has been texting them and thought that they would not arrive in Hong Kong until next week.

Cho Lam admitted he had “waited for a long time” to pop the big question, taking two weeks to carefully plan ahead. Last year, Cho Lam spent $15 million HKD to custom build a 3000-square-feet house in Sai Kung for their love nest.

Leanne’s close friend, Linda Chung (鍾嘉欣) knew of the arrangement in advance and found it difficult to keep the secret. Linda said, “I was very moved [by the proposal]. I met Leanne when I arrived in Hong Kong. I’m very happy to witness them becoming friends, dating, and now planning to get married.”

TVB Chairman Norman Leung (梁乃鵬) said he was unaware of Cho Lam’s intention to propose at the Anniversary, but was moved to tears in witnessing the couple’s joyous moment.