Wong Hei Treated Coldly On His Last Day At TVB 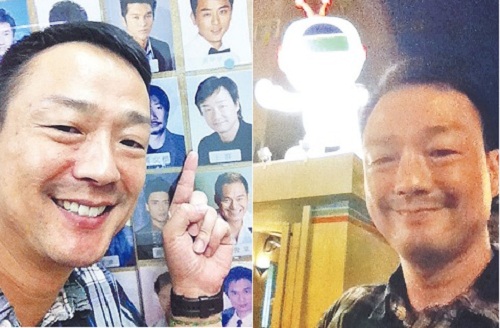 Wong Hei (王喜) worked at TVB for 16 years and suffered from cold treatment in recent years. Eventually, he decided to leave the company due to dissatisfaction. On September 29th, Wong Hei’s TVB contract officially expired and he left with mixed feelings.

Although Wong Hei was good friends with TVB executive, Stephen Chan (陳志雲), Wong Hei was not promoted at the compnay. In fact, the Artist Management department suggested that Wong Hei pay money to terminate his contract early. The turn of events made Wong Hei disheartened. Before leaving, Wong Hei returned to his locker at TVB City to obtain a few items and take pictures. He had mixed feelings and did not expect to be faced with further unsympathetic treatment by the staff, who had terminated his employee ID card access rights to the premises in advance.

Wong Hei worked at TVB for many years, delivering numerous classic performances in highly rated series, including the three installments of Burning Flame <烈火雄心>. However, his workload plummeted in recent years. Rumors suggested that he did not get along with TVB executive, Virginia Lok (樂易玲). Accused of not delivering enough [vendor] show appearances, Wong Hei was advised by the Artist Management department to terminate his contract early by paying a fee.  This cold treatment gave Wong Hei a great sense of helplessness and made him highly uncomfortable.

Last night, Wong Hei packed his possessions from his personal locker, #181, and to say goodbye to the people he cherished. On his blog, Wong Hei posted photos and expressed the mixed feelings he felt on his last day at TVB.

With his 16-year career at TVB, Wong Hei had the most difficulty in bidding farewell to Producer Amy Wong (王心慰).  Last night, Wong Hei stopped by Amy’s office to reminsce over past memories, which made him feel emotional and started crying.  “This is the mother of ‘Yau Chi Tak,’ ‘Lok Tin Yau,’ ‘Kei Tak Tin,’ and ‘Chung Yau Sing.’ Over the last 16 years, Amy Wong was the producer who trusted me the most.  She allowed me to inject blood, tears, and soul into the characters which she created.  For each role, I asked her: ‘Did I portray the role as you imagined it to be?’ Each time, she will look at me steadily before saying: “Sometimes you did and sometimes you did not. You can do better, but let’s drop the matter.’

“Ha ha, this evening, I deliberately entered Amy’s office after work hours to secretly take pictures for memories’ sake. My intention was that I did not want to cry in front of Amy. Unfortunately, my tears are currently falling while I am typing these words right now.”

As TVB’s former “biological son,” Wong Hei recollected upon some old photos [that were posted in TVB’s offices], “This photo was taken in 2006, after I signed a management contract to become a ‘biological son.’ The Artist Management department designed my image. At the time, I had quit smoking and thus my face was plump ha ha, but unfortunately it did not produce a ‘cute’ effect which made everyone love me. Ha ha, all along, I felt that this wall, which is filled with artist head shots, reaked of an ash smell.  Do you share the same feeling?”

Before leaving TVB City, Wong Hei wanted to take a photo with the company’s mascot, TV Buddy, but he discovered his employee ID card was denied access. “When I wanted to go past the main gates and outside the door to take pictures with TV Buddy, my employee ID card was denied access. I only had access to the parking area, while entry to other locations were canceled. One of the security guards said surprisingly, ‘Although it was not yet 12 midnight, the access has been canceled already? Isn’t that too cold?’ I asked, “Can you open the gate and let me take a picture before leaving? I will leave from the parking lot afterwards.’ He said, ‘Sure.'”

Future Path to Be Announced

Wong Hei’s final words to TVB were: “Thanks to TVB for giving me challenging and life-risking opportunities over the last 16 years. Hopefully, from now onwards, everyone’s futures will only grow better and better.  Bye bye lah!”

Although TVB was not the place for him, Wong Hei will find the proper place for him. Recently, Wong Hei was contacted by Now TV executive, Ho Lai Chuen (何麗全) to discuss program hosting opportunities. Asked about his future direction, Wong Hei indicated that he was currently negotiating with other producers and will reveal his career plans later.

Clarified That He Did Not Tamper With Scripts

Appearing on an interview program with mainland’s Phoenix TV, Wong Hei admitted that he was a little “naive” and was willing to bear the work environment at TVB for 16 years because he wanted to repay the company.  “Prior to entering TVB, I was unemployed for 9 months.  Precisely at this time, TVB called me.” For many years, Wong Hei was accused of tampering with television scripts and plagued by negative rumors. Through different platforms, he hoped that audiences realized he was not this type of person.

Recently, Wong Hei also discovered that many people treated him very well, such as offering him work and worrying about his future without a job. Upon saying this, Wong Hei’s voice choked and he started wiping away tears.

Jayne: As always, I am moved by Wong Hei’s heartfelt words. He may come across as a bit headstrong, but I sense that he possesses a fierce sense of justice and may even be over idealistic. He may even have high expectations and inability to compromise his principles in certain situations.

Similiar to Steven Ma, Wong Hei is a passionate individual who put in a lot of efforts to make his onscreen performances come alive and memorable years after their broadcast. Not only did TVB not recognize his actions, Virginia Lok publicly declared him to be “difficult” and his efforts were largely underappreciated.

His last evening at TVB City was bittersweet and I can imagine how sad he was while reminscing the fonder memories over the last 16 years. After graduating from school, work takes up so much of our life and memories may even be categorized by the different jobs we’ve held over the years.  When a person leaves a school or job, a place where you have spent a significant number of years and developed friendships, it is indeed difficult to move on, especially when the future may not be clear. Leaving an old job is leaving a safety net we have become accustomed to. But life is about moving on and new experiences and meeting new people, otherwise it wouldn’t be too interesting.

Wong Hei is about to enter a different stage of his life. I hope his talent is recognized and utilized well by his future employer. Wish him the best in his career and personal happiness as well! He has already climbed Mount Everest, but there are still other mountains to be explored!