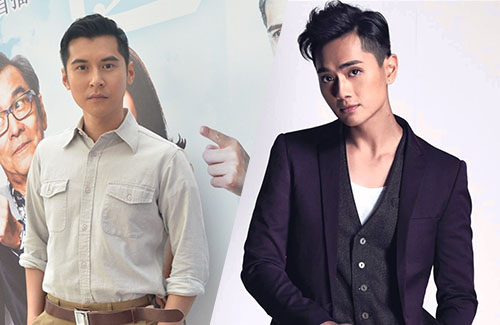 It’s only been a week since the premiere of TVB’s latest family drama Daddy Cool <逆緣>, and the drama is already being labeled as a success. The show is male lead Carlos Chan’s (陳家樂) first TVB drama since 2008’s Dressage to Win <盛裝舞步愛作戰>, and Daddy Cool is putting the singer back into the mainstream spotlight.

It isn’t a surprise to know that Carlos Chan wasn’t the first choice for the lead role Chung Ting-kwok. It is unlikely of TVB to cast a non-TVB actor in a leading TVB role, and according to a new source, producer Amy Wong (王心慰) originally wanted Fred Cheng (鄭俊弘) for the role.

When the show was still in pre-production in early 2017, a dating scandal broke out between Fred and TVB singer Stephanie Ho (何雁詩). The news broke soon after the airing of Fred’s TVB drama Provocateur <與諜同謀>, in which he co-starred TV King Gallen Lo (羅嘉良). The dating scandal took a blow on Fred’s image—not only were his fans upset, it was also rumored that Fred had cheated on his then-girlfriend Lesley Chiang (姜麗文) of Benji and Lesley to be with Stephanie.

Fred’s dating scandal, however, was not the reason why the actor-singer was allegedly fired from Daddy Cool. The source said TVB actually wanted to continue their promotion of Fred as a “double line” artiste despite the scandal. But when the casting directors reached out to Fred again in June 2017 for the role, Fred chose not to answer their calls. Upset with Fred’s unprofessional behavior, the casting crew replaced him with Carlos Chan.

Reporters reached out to producer Amy Wong for the truth behind the reports. The award-winning producer, who has produced dramas such as Last One Standing <與敵同行> and Lord of Shanghai <梟雄>, admitted that she did consider Fred for the role. She said, “We wrote this character, who came from 1945, as a way to make the current society stand out. We’ve actually considered many people, and we went on a lot of searches.”

On why they decided to not choose Fred in the end, Amy Wong said, “It was a problem with timing. We did consider [Fred], but to clarify, we never wrote that role with any particular artiste in mind. That’s not how my team works. We write the script first, and then we search for an actor who is suitable for the character. When I saw Carlos, I immediately saw our character in him. That’s why we chose him. There was no hesitation.”

Mentioning the good reviews that Carlos has been getting for his performance, Amy Wong said, “Carlos definitely has that righteous air to him. No matter if it’s on the show or in real life, we all like to joke that he’s like a piece of wood. We really wanted to know how people would react when you bring a character with such orthodox principles from 1945, into the modern world of 2018.”