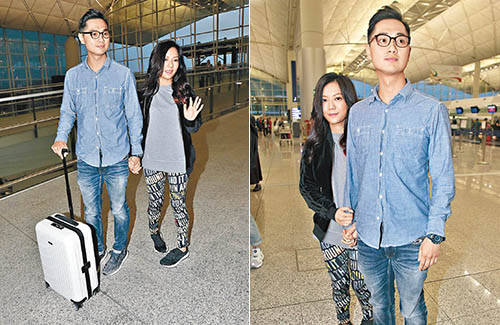 Last week, paparazzi saw Fred and Stephanie meeting up with their friend, Winki Lai (賴慰玲), at a coffee shop. When confronted by reporters, the couple denied dating, insisting that they were only friends. Soon after, news surfaced about Fred’s ex-fiancée Beebs, who he dated for three years. There was gossip that Stephanie was the third party in their relationship.

After this news was brought to light, Fred decided to finally speak up and clarify. He told reporters that Beebs was never his fiancée, as she turned him down when he proposed to her. He stressed that Stephanie had nothing to do with his breakup with Beebs.

After paparazzi exposed another shot of Fred and Stephanie going out on a date, the couple had no choice but to admit to their relationship. Yesterday, Stephanie showed up at the airport with Fred, holding his hand. Stephanie, who was on her way to Beijing to film Succession War <天命>, asked Fred to come with her so they could face the public together.

Holding hands, the couple allowed reporters to take photos and did an impromptu interview. Fred said, “Many things have happened recently and my family was starting to get worried, which is why I need to step up to clarify this now. Stephanie and I have always been close friends. We share many things in common, whether it’s about music or our viewpoints in life. We’ve also went through some unhappy relationships, so we know we can support each other. I’ve always been very low-profile about my dating life, so not many people knew about my past relationships. Even Stephanie doesn’t know. But [my relationship with Beebs] has been over for a while. The reason why I don’t talk about it is because I respect her, and I want to protect her.”

Is holding hands with Stephanie a gesture of admitting your relationship to the public? Fred said, “I know I didn’t handle this very well, so I really want to thank Stephanie for her support, love, and trust during this time. Our relationship has just started. I cherish it so I didn’t want it to go public.” (How long have you guys been dating?) “Because of last night’s report [about Beebs], I had to come out and clarify. I have to protect Stephanie. I need to be responsible of this matter.”

As for the paparazzi photos of them holding hands, Stephanie said, “Please support us a little more, and especially more to Fred Cheng because it’s been very difficult for him. He’s in a lot of pressure, and I hope that you guys can look after him while I’m not in Hong Kong!”

Not even Herman Ho (何哲圖), Stephanie’s record producer, knew about her relationship with Fred. She admitted to lying about their relationship, saying, “He only heard about it through reports. We’ve kept our relationship very hidden. I admit that we have misled everyone in our answers, but we wanted to protect this relationship. We thought this would be for the best. Admitting it today is courage’s first step.”

Later that day, Stephanie dropped a message to her fans on her social media accounts, writing, “I’ve always been very serious about my relationships…. I will never be the third person under known circumstances. Today, I’ve come across a person I really like, because he is just like me. I hope this incident comes to an end. There are things I may be ignorant about, but I have nothing to hide.”