Earlier this month, police arrested Mat Yeung (楊明) for driving while intoxicated after he crashed his car and refused a breathalyzer exam. As a result, rumors swirled that Edwin Siu (蕭正楠) would replace Mat in the new TVB drama, tentatively titled No Problems in the Guo Family <郭家無難事>, and play a couple with Roxanne Tong (湯洛雯). However, it looks like Mat is emerging unscathed from his DUI incident. Producer Amy Wong (王心慰) cleared up the allegations and said she never planned on dropping Mat, and filming would commence at the end of September. 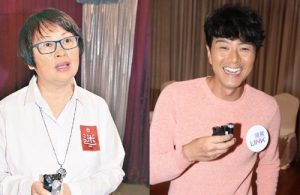 In an interview with Amy, she said she has always intended to cast Mat since the initial planning stages for this drama. She also clarified that she doesn’t know where the rumors of Edwin replacing Mat came from, as other reporters have not asked her about this matter. Amy also shared that she has not approached Roxanne about any roles.

Given Mat’s great performance at work, TVB does not want to give up on him. In an interview with Mat, he said, “The company is giving me time to rest because I injured my pelvic bone and tailbone, and my intervertebral disk is still protruding from the incident. I have not received any news from the company yet, but they have called to check up on me. I am happy to hear that Amy does not plan on replacing me with someone else, so I will start exercising again once I recover.”

As with Edwin, he was confused to hear rumors about replacing Mat in the upcoming drama. He said, “I haven’t heard about this arrangement, and Amy has not approached me. The seriousness of the COVID-19 pandemic impacted a lot of filming schedules. I don’t even know how my work schedule will play out.”