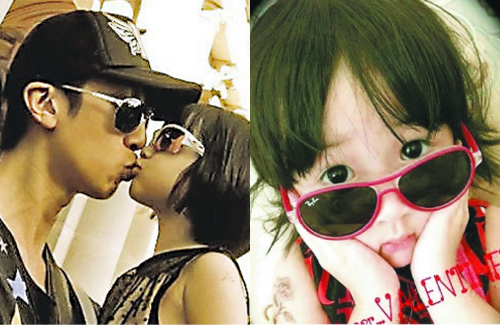 Instead of sharing romantic shots with his wife on Valentine’s Day, Taiwanese artist, Wu Chun (吳尊), decided to upload cute photographs of himself with his daughter. For the first time, the public was able to see clearly the facial features of his 3-year-old daughter, Nei Nei. According to Wu Chun, Nei Nei greatly resembles both him and his wife, Lin Li Ying (林麗瑩).

Last October, Wu Chun revealed shocking news that he is a married man with a daughter. He announced the news as the birth of his second child, a son, occurred days later. Wu Chun apologized for deceiving the press for years and explained he was only respecting his wife’s decision to keep their family life private from the media’s limelight.

Since then, Wu Chun became more open in discussing family matters. He shared how his wife was a high school sweetheart, and that his daughter was conceived in Hong Kong in 2010. With his son born in October 2013, Wu Chun is now a father of two children and revealed aspects of his family life in his book, Ignite Courage <決定勇敢>. Yesterday, Wu Chun posted adorable photos of his daughter on his official fan website. One photo was a large face shot that showed Nei Nei’s round eyes peeking out from behind a pair of red sunglasses. Another photo showed Wu Chun and his daughter kissing sweetly on the lips.

Wu Chun proudly wrote, “Today is a double celebration and we just had a big feast at home! I am filled with JOY again so I really wanted to share something ‘SPECIAL’…haha. Yeah, it’s time for me to be ‘show-off’ my little princess to my lovely angels hahaa.”

7 comments to Wu Chun Exposes Photos of His Daughter