Wu Chun on Loving His Wife for 22 Years 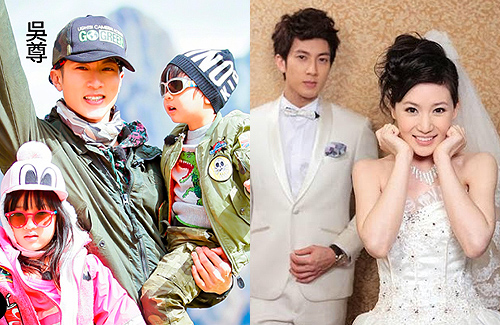 Wu Chun (吳尊) and his wife, Lin Liying (林麗瑩), have been happily married for eight years and are parents to two beautiful children. The couple met when they were just 16 years old and were each other’s first loves. Because Liying is not from the entertainment industry, the couple kept their relationship a secret. After dating for 18 years, they finally tied the knot in 2009.

To be more involved in his children’s lives and take care of his family, Wu Chun decided to reduce his workload and left the Taiwanese boy band Fahrenheit (飛輪海) in 2011 that shot him to fame.  Although many felt it was a pity, Wu Chun instead felt that his career was now secondary to his family. “You can’t be too greedy. You have to learn to sacrifice some things. Everyone thought it was a pity, but I don’t feel that way at all. I already have a great family. Fame and fortune is just a bonus.”

Although Wu Chun rarely talks about his wife in public, the 38-year-old actor shared in a recent interview some insights to his marriage. When asked how he retains freshness in his marriage, Wu Chun said, “The most important thing is whether or not you cherish the relationship, and whether she is important to you. We don’t celebrate birthdays or Valentine’s. We use actions to show each other.”

In Wu Chun’s mind, every day could be Valentine’s Day.  However, one thing he has gotten into the habit of doing is telling his wife “I love you” before going to bed every night. Despite his busy schedule with work and fatherly responsibilities, he always makes time to go on dates with his wife and spend quality time together.

Wu Chun’s marriage was not made public until 2013, when he suddenly confessed that he was married and is a proud father to a beautiful daughter. Because of the underground relationship, the couple did not hold a ceremony when they got married. Asked if they would do a vow renewal and make up the ceremony on their 10-year anniversary, Wu Chun said, “We definitely will do it. Our mindset is to let nature take its course. A wedding ceremony with [our] children present is definitely very special.”