Xu Kai (许凯) and his Arsenal Military Academy <烈火军校> costar Bai Lu (白鹿) are known for being good friends, close enough to the point where rumors of them being in a relationship are spreading like wildfire. And it turns out that their close relationship may be backfiring on them. 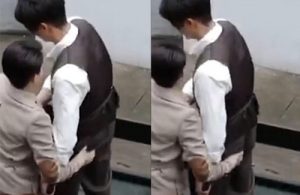 The costars were recently photographed acting intimately on set, with Bai Lu grabbing onto Xu Kai’s bottom. In the photo, it didn’t appear as if Xu Kai was taken off guard by Bai Lu’s actions, but netizens think otherwise. They pointed out that Bai Lu has no sense of propriety, and that her actions were gross, disrespectful, and sexual harassment.

The heated discussion has led producer Yu Zheng (于正), producer of the show and the owner of their agency, to release a statement, warning netizens that their commentary on the matter is potentially slandering his artists. The production team followed up with a statement that Xu Kai and Bai Lu were actually rehearsing for a scripted scene. The team will seek legal action if slandering comments continue to circulate about the drama’s artists.

Arsenal Military Academy is Xu Kai and Bai Lu’s third collaboration. Their dating rumors have been going on since 2017’s The Legends <招搖>, in which they portrayed a couple. Xu Kai was once photographed leaving Bai Lu’s apartment.

This article was edited on August 20, 2019 at 1:56 p.m. with the production team’s statement and a video depicting the incident.