(Above): Yang Yang shows off his cheeky side in a new uniform drama.

Starring in a number of productions lately, Chinese actor Yang Yang’s (楊洋) dramas have performed well, such as Glory of Special Forces <特戰榮耀> and wuxia drama Who Rules the World <且試天下>. 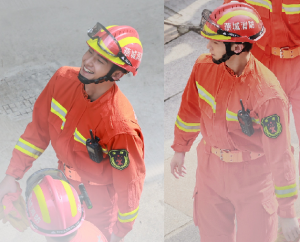 In an upcoming drama, he plays a firefighter captain and is set to pair with Wang Churan (王楚然) from Royal Feast <尚食>. Photos of him dressed in a bright orange firefighters’ uniform were exposed, showing a chivalrous-looking and stylish Yang Yang, which got starry-eyed fans raving.

Bantering around with another co-star, he gently kicked the latter with his foot in a light-hearted photo which captured his previously-unseen cheeky side, fueling anticipation for the production.