Although Vincent Wong (王浩信) came out on top as a two-time TV King at the 2020 TVB Anniversary Awards, his win wasn’t the highlight of the night. What made headlines the next day was the expressionless look his wife, Yoyo Chen (陈自瑶), had when he thanked her during his speech. The public believed Yoyo’s reaction confirmed her marriage with Vincent is on the rocks. 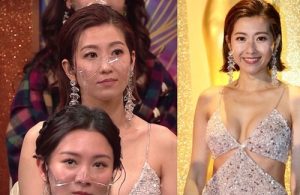 After the awards ceremony ended, she explained to reporters that she was distracted during her husband’s speech and a bit out of it because she wasn’t feeling too well due to the cold weather. The actress also expressed that she did not want to get in the way of her husband’s interviews and photo-ops and would return home first to take care of their daughter. Later that night, Yoyo expressed in an Instagram story that it is not easy taking care of both her family and career.

Despite Yoyo’s slew of reasons for her facial expression, outsiders are not convinced. It doesn’t help that the couple has not celebrated Vincent’s big win even though it’s been a few days. “He answered this the other night. He is very busy right now, so there is no time to celebrate,” the actress said during the promotional event for her new drama The Gatekeepers <把關者們>.

Yoyo is the Real Best Actress

When reporters asked how she felt about netizens joking that she should have received the Best Actress award for her dark expression, Yoyo said she did not watch the clip and only read the news article. Smiling, she replied, “Thank you for the compliment.”

As for her popularity overshadowing the freshly crowned TV Queen Sisley Choi (蔡思貝), she said, “I am happy. Thank you for everyone’s support. Thank you.”