“Always and Ever” Synopsis 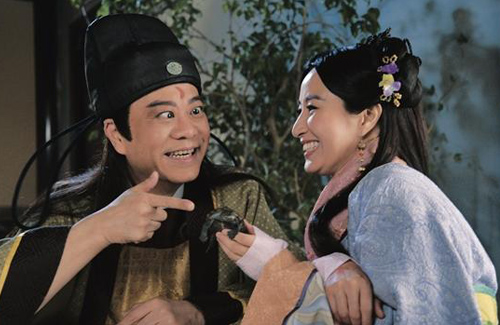 It took Bobby Au Yeung (歐陽震華) and Esther Kwan (關詠荷) ten years before working together again. Their previous two series together, Armed Reaction <陀槍師姐>, and Taming of the Princess <醉打金枝>, received high praises and the pair even won the Most Comedic On-Screen Duo Award at the 1997 TVB anniversary awards ceremony. On August 12, they will reunite in Always and Ever <情逆三世緣>, allowing viewers to enjoy their onscreen chemistry once again.

During an operation, CIB officer, Circle Yuen (Bobby Au Yeung) accidentally kills his girlfriend, Phoenix Yeung and feels highly regretful afterwards. Because of his remorse, he is sent back through time to the Song Dynasty where he is now the infamous Bao Zheng, an imperial government official. As Bao Zheng, Circle is surprised to see a girl, Han Sheung Sheung (Esther Kwan), who looks exactly like his deseased girlfriend. Because of Ko Yiu On’s (Ben Wong 黃智賢) evil-doings, she is eventually forced to be executed by Bao Zheng.

Time shifts again and Circle winds up in the 1950s as inspector Wah Lung Piew. This time, he meets Tin Chau Fung, a boss of a triad group, who also bares a resemblance to both Sheung Sheung and Phoenix. In this era, Chau Fung mistakens Lung Piew as her late husband’s murderer and begins a citywide chase for his head. While desperately trying to prove his innocence, Lung Piew meets his parents, Lam Yim Fong (Rebecca Zhu 朱晨麗) and Yuen Kui (Pierre Ngo 敖嘉年). Once again, due to fate, Lung Piew accidentally kills Chau Fung – thus ending the cycle and bringing him back to the future where he is given a second chance to alter this unfortunate destiny.

Circle Yuen (Bobby Au Yeung): the smart and meticulous CIB officer who is solely devoted to solving mysteries and his girlfriend, whom he has the intention to marry.

Phoenix Yeung (Esther Kwan): The social and charismatic lead anchor who interviews a famous doctor, only to find that he is a childhood friend and drug dealer. Phoenix is also highly skilled in shooting, even beating out Circle, who’s an actual officer.

Chung Chi Lun (Timothy Cheng 鄭子誠): A manipulative and calculating doctor who is secretly an underground drug trafficker. He sets up a ploy to get rid of both Phoenix and Circle who have become suspicious of his illegal work.

Bao Zheng (Bobby Au-yeung): Time-traveling to the past, Circle is now Bao Zheng, most commonly known as Bao Zheng Tin. Bao Zheng serves as the judge in the case involving a woman who looks like Phoenix and immediately tries to revive her memories of Phoenix.

Hang Sheung Sheung (Esther Kwan): A kind woman who seems cold at first but warms up to Bao Zheng after helping him solve a number of cases. She is betrothed to a senior who eventually comes to destroy her relationship with Bao Zheng out of jealousy.

Ko Yiu On (Ben Wong): An overly ambitious and wealthy man who calculates to destroy Bao Zheng because of his own jealousy. He forces Sheung Sheung to cast a curse on herself that she will forever be killed by the man she loves.

Kung Suen Chak (Ram Chiang 蔣志光): A polite and curious man who has a passion for mystery and science that Bao Zheng confides in during his stay in the Song Dynasty. For the most part, he believes Bao Zheng’s theory of how he traveled back in time and helps him with his case solving duties.

Chiu Pan (Christine Kuo 苟芸慧): Chiu Fun is a spoiled but kind-hearted princess that goes undercover as a man to help Sheung Sheung with her hearing. She meets Chin Chiu with whom she becomes a bickering pair.

Chin Chiu (Benjamin Yuen 袁偉豪): Chin Chiu is highly skilled in martial arts and remains loyal to Bao Zheng throughout his journey. Besides helping out in solving cases, he is seen to be arguing with the hot-headed princess, Chiu Fun.

Wah Lung Piew (Bobby Au Yeung): After having to execute Sheung Sheung, Circle travels to the 50s where he is now inspector Wah. Lung Piew also meets his parents from when they were young and unmarried. While Lung Piew attempts to find out why his mother left him when he was young, she ends up falling in love with Lung Piew.

Tin Chau Fung (Esther Kwan): A triad boss who is focused on avenging her late husband. Chau Fung chases Lung Piew around the city because she thinks he is the murderer.

Tin Chau Yan (Mandy Wong 黃智雯): Unlike her sister, Chau Fung who is loyal and courageous, Chau Yan is vengeful and selfish. Chau Yan hates her sister and enters the police force with one purpose in mind: to kill Chau Fung.

Yuen Kui (Pierre Ngo): As Circle’s dad, he is a man who lives by his principles. He ends up falling in love with Circle’s mom but never explained why she suddenly left the family.

Lam Yim Fong (Rebecca Zhu): Without knowing that she is Circle’s mom, she ends up developing feelings for Lung Piew, much to his dismay.

With the success of previous series that incorporated time travel, TVB decided to launch this suspenseful romantic drama as a way to increase viewership. The producer Chong Wai Kin (莊偉建) revealed that the main theme for Always and Ever is sacrifice – in which Bobby’s characters will have to sacrifice his love for others.

Producer Chong explained that there is approximately a 1,000-year difference from the Song Dynasty to the modern days and this time difference successfully creates a tragic love story for the star-crossed lovers.  To catch the drama’s broadcast, viewers should tune in on August 12 to witness the grand production of Always and Ever.

14 comments to “Always and Ever” Synopsis