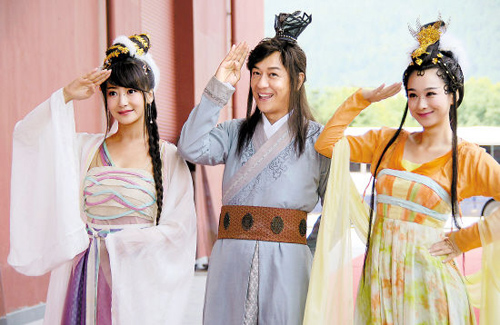 The mythological TV drama, A Happy Life <天天有喜>, which is currently showing on Hunan Satellite TV, has seen its ratings soar since it began airing at the end of June. The series captured the number-one position in ratings nationwide, despite going against heavy hitters like The Patriot Yue Fei <精忠岳飛> and Legend of Goddess Luo <新洛神>, and has led fans to dub this year’s summer vacation as “the month of Benny Chan.”

In A Happy Life, Hong Kong actor/singer Benny Chan (陳浩民) plays Liu Feng, a filial man from a poverty-stricken family, who meets a crafty fox spirit named Bai Meiying. Played by mainland Chinese actress Monica Mu (穆婷婷), Meiying is an immortal princess who does not wish to marry another spirit. As a result, she asks Liu Feng to pretend to be her husband. As she is thrown headfirst into married life, she must resolve issues like getting along with her mother-in-law, carrying on the ancestral line, and educating the future generation.

When asked about working with Monica, Benny replied, “When Monica and I completely understand the personalities of each other’s characters and have extremely brilliant scenes together, the scenes are all very lively performances, no matter if we are fighting or quarreling. Also, they reveal even more interesting details from family life.”

Because Hunan TV previously aired The Legend of Crazy Monk <活佛濟公>, which also stars Benny, many netizens joked that this summer could be called “the month of Benny Chan,” since he appeared on television so often. One netizen even left a message saying, “During summer vacation, I don’t do my homework, because I’m watching Benny Chan’s A Happy Life.” In response, Benny sternly said, “I still hope that students will finish their homework before watching TV, otherwise I won’t welcome them to watch.”