Eddie Kwan Jumps to the Moon in “Ruse of Engagement” Parody 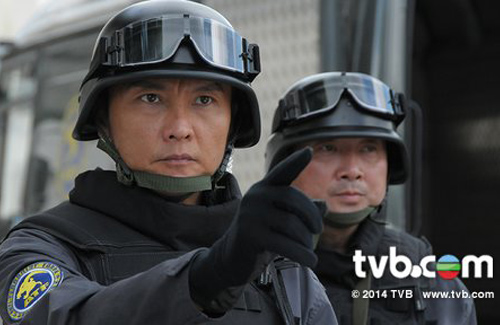 The third week of broadcast for the TVB action-crime drama Ruse of Engagement <叛逃> is almost coming to an end, but netizens still have not forgotten about Eddie Kwan’s (關禮傑) superhuman leap across the Hong Kong skies.

In episode 5, which aired on March 21, 2014, Eddie Kwan’s character, the ATF leader Ngo Sir, demonstrated his strength to his trainees by jumping across two high buildings. As the two buildings were at least 6 to 7 meters apart, netizens joked that Eddie had already broken a world record with his high jump. The scene of his “world class-level” jump immediately went viral after it was uploaded online. Many people shared edited videos of Eddie jumping into random scenarios, and it became a popular Internet meme in Hong Kong.

Yesterday Eddie Kwan, Ruco Chan and Shirley Yeung (楊思琦) attended a promotional event for their upcoming drama ICAC Investigators 2014 <廉政行動2014>. They talked about Eddie’s Internet meme, to which Eddie said that he was initially at a loss. Revealing that he was working in Thailand at the time, he had no idea that his scene became the talk of the town until his wife sent a fan-edit video of him jumping to the moon. “My friends couldn’t stop laughing at me,” said Eddie.

Ruco stated that he is glad to see so many spoofs of the scene, pointing out that it must mean that the public is paying attention to the series. “It’s better than no one watching it,” he said. Ruco then added with a laugh, “I told Eddie that he’s been really popular recently. He’s amazing!”

It was earlier reported that Shirley Yeung was facing cuts in her TVB salary due to her declining public image and her status as a single mother. Additional rumors claimed that Shirley had to go through auditions in order to earn a contract renewal. Shirley denied, “I never had to do that before. I’ve been around for over a decade. I’m old. There’s no need to audition.”

She admitted that she is currently negotiating for a contract renewal, and stressed, “In the years I’ve been with TVB, my pay was never considered high.” As for whether or not she would be willing to accept a cut in salary, she said, “I don’t know! It’s negotiable. But the company is developing well now. Why would they cut our salaries?”

“Ruse of Engagement” Parody: Eddie Kwan Jumps to the Moon