Fennie Yuen Finds Filming Too Tedious For Her Age 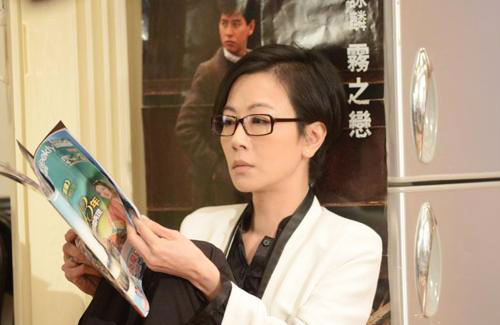 After a ten-year hiatus, Fennie Yuen (袁潔瑩) returns to television screens in the currently airing TVB series, Never Dance Alone <女人俱樂部>. The series deviates from TVB’s usual themes and focuses on the lives of a group of women who have known each other since adolescence. Fennie revealed the reason for the long break from filming was because her body could not cope with the tedious work schedules. In order to ensure a routinely lifestyle, she may not film another series at this point.

Average viewership ratings for Never Dance Alone were 26 points, and peaked at 28 points in its first week of broadcast. Asked if she is satisfied, Fennie is unclear of what is now considered to be standard ratings. “Hopefully the ratings will rise slowly, because it’s rare to have this type of theme. The audience needs to warm up to it.” When there is time, Fennie would also catch the series from myTV on TVB’s online website, since it is very convenient. “I heard viewers on myTV also count [toward viewership ratings],” she said.

Fennie shared she treasures good sleep, which is difficult to achieve during filming. While shooting Never Dance Alone, there were many times when the cast had to work until 4 or 5 a.m. Fennie admitted, “It’s really hard for me to get used to more than ten hours of work. I’m also not young anymore, and it’s tedious to film for 15 hours. I can’t just say I want to quit in the middle of filming, because it’s a matter of professional conduct. I wouldn’t want to leave behind a negative image as soon as I return.”

In terms of future plans, Fennie decided she would only film if work ends by midnight. “Currently, I’ve been getting lots of sleep. Last night, I slept later than usual, and although I’ve slept for eight hours, it still felt lacking.” Not wishing to impact a good sleep cycle by having to stay up late, Fennie may not film another series. Although she truly enjoys her job as an actress, she expressed she will leave the job up to the younger artistes.